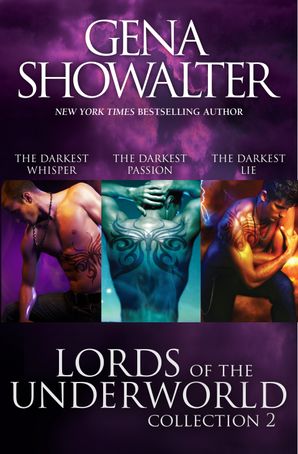 Lords of the Underworld #0

Bound by the demon of Doubt, Sabin unintentionally destroys even the most confident of lovers. So the immortal warrior spends his time on the battlefield instead of in the bedroom, victory his only concern…until he meets Gwendolyn the Timid. One taste of the beautiful redhead and he craves more.

Gwen, an immortal herself, always thought she'd fall for a kind human who wouldn't rouse her darker side. But when Sabin frees her from prison, battling their enemies for the claim to Pandora's box turns out to be nothing compared to the battle Sabin and Gwen will wage against love….

New York Times bestselling author Gena Showalter returns with another sizzling installment of the Lords of the Underworld series as Aeron, keeper of the Demon of Wrath, finally meets his match….

For weeks, the immortal warrior Aeron has sensed an invisible female presence. An angel–demon–assassin–has been sent to kill him.  Or has she?  Olivia claims she fell from the heavens, giving up immortality because she couldn't bear to harm him. But trusting–and falling for–Olivia will endanger them all.  So how has this “mortal” with the huge blue eyes already unleashed Aeron's darkest passion?

Now, with an enemy hot on his trail and his faithful demon companion determined to remove Olivia from his life, Aeron is trapped between duty and consuming desire.  Worse still, a new executioner has been sent to do the job Olivia wouldn't….

In this riveting new installment of New York Times bestselling author Gena Showalter's Lords of the Underworld series, Gideon, keeper of the Demon of Lies, fights to uncover the truth…

Forced to his knees in agony whenever he speaks the truth, Gideon can recognize any lie–until he captures Scarlet, a demon–possessed immortal who claims to be his long–lost wife.  He doesn't remember the beautiful female, much less wedding–or bedding–her.  But he wants to . . . almost as much as he wants her.

But Scarlet is keeper of Nightmares, too dangerous to roam free.  A future with her might mean ultimate ruin.  Especially as Gideon's enemies draw closer–and the truth threatens to destroy all he's come to love . . .

Look for more passion and danger in these Lords of the Underworld tales by Gena Showalter!