'Well Well Well!!! What a little gem this was. The Modern Woman's Guide to Finding a Knight is a romance of old. I was charmed all the way as Connie and Dom found their own sweet HEA.' - Goodreads review

All's Faire in love and war...

Connie leads a double life. During the week, she is an up–and–coming designer and dressmaker, creating sleek, elegant gowns for the wealthy elite. But come the weekend, Connie becomes Lady Constance, a member of the House Felicitous at the local Renaissance Faire, creating beautiful historical garments for herself and her friends and teaching dancing to fair attendees. Fearing loss of business should her stylish clientèle discover her extracurricular activities, Connie keeps her professional life and her faire life carefully separate. However, everything changes when she's saved from certain death by Sir Justin: a rising star in the joust and an actual knight in shining armour.

Behind his mask as Sir Justin, Dominic is confident and charismatic, but out of his armour, his courage fails him, and to his own horror he finds himself accidentally pretending to be his own best friend. Suddenly, he is in Connie's life as two different men: the elusive Sir Justin who courts her over the internet and from behind a suit of armour and Justin's 'best friend' Dominic who hangs out at her apartment and helps her move. The lie only grows bigger and Sir Justin finds himself faced with the most frightening challenge he can imagine: extricating himself from his lie and winning Connie's heart as his true self.

But there's something rotten afoot at the Faire, something that threatens its future, the community that has grown there, and even Sir Justin's life. Will Lady Constance find the courage to step up and risk everything to defend her friends, save the Faire, and rescue her knight? 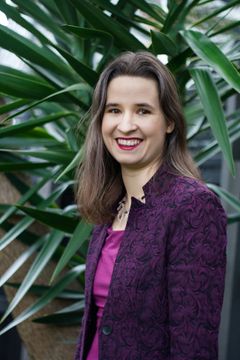 Anna Klein grew up on fantastical fairy tales and hasn't yet seen any reason to grow out of playing pretend. She completed a Masters degree in English in horror literature, but now writes about sweet, geeky and slightly awkward people finding love. She loves to escape reality through books, TV, movies and roleplaying games. She believes art is the closest thing to magic in the world. She's handy with both a sewing machine and a sword, and she lives in Auckland, New Zealand with her husband.
View author profile