A brand new timeless romance with a sprinkling of magic. Read a sneak peek from With This Kiss by Carrie Hope Fletcher. 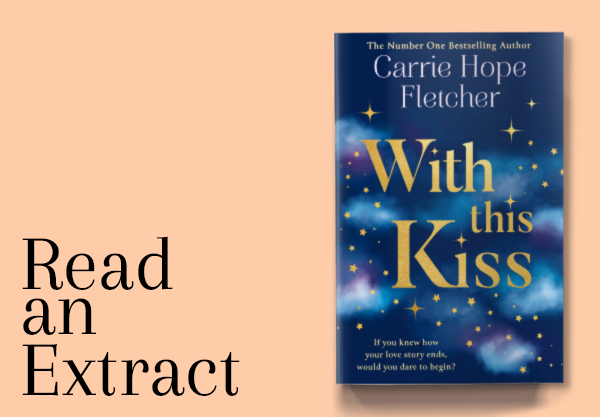 ‘A complete joy to read, and once I’d started I genuinely couldn’t stop. I was entranced and beguiled from start to finish by this beautiful story. Carrie has single-handedly converted me to magic realism’ Jill Mansell

‘A spellbinding and enchanting read with a charming cast of characters, With This Kiss is guaranteed to sweep you off your feet and have you rooting for Lorelai’s happy-ever-after right up to the final page. I adored it’ Holly Miller, The Sight of You

If you knew how your love story ends, would you dare to begin?

From the outside, Lorelai is an ordinary young woman with a normal life. She loves reading, she works at the local cinema and she adores living with her best friend. But she carries a painful burden, something she’s kept hidden for years; whenever she kisses someone on the lips, she sees how they are going to die.

Lorelai has never known if she’s seeing what was always meant to be, or if her kiss is the thing that decides their destiny. And so, she hasn’t kissed anyone since she was eighteen.

Then she meets Grayson. Sweet, clever, funny Grayson. And for the first time in years she yearns for a man’s kiss. But she can’t…or can she? And if she does, should she try to intervene and change what she sees?

Spellbinding, magical and utterly original, With This Kiss is one love story you will never forget.

How often does death cross your mind? Is it once a year when you hear of a tragedy which sends you spiraling into an existential crisis? A scare that can only be escaped by vowing to live every day as if it were your last? Do you wake up each week in a cold sweat after dreaming a loved one passed away unexpectedly and as soon as morning hits, you call to let them know they’re loved? Or is it daily, when something as simple as the prospect of a kiss sends you reeling into the abyss? If you knew the lightness of your lips created such darkness, would you ever kiss me again? If you were me, would you press your mouth against mine knowing the nightmare that awaits you? Or would you be done with it? Done with love and its embellishments and frivolities? So tell me, can you really call it living when all you do is run from death? Because if there’s one thing I know with certainty it’s that death will meet us all.

Lorelai wondered what it was about the small hours of the morning that made her mind so much clearer. Maybe it was the initial clarity that came once the fog lifted from yet another bad dream or maybe it was that Joanie, her best friend, was still fast asleep and therefore quiet. Either way, five o’clock in the morning seemed to be her sweet spot. Long enough after a nightmare for the gruesome details to subside yet soon enough after waking that she didn’t slip back into tiredness. She had started leaving her notebook and her favourite pen out on the kitchen table each evening. This way, a rough night was sweetened with the prospect of doing what she loved the most as soon as she awoke – writing.

Lorelai crept into the kitchen to put the kettle on, and then tiptoed into the living room to browse her pride and joy: her books. Each book sat next to its movie or television adaptation. Lorelai was fascinated by the difference between the book and its adaptation. How did screenwriters choose which scenes to cut, which characters to change and which lines of dialogue were so integral that they had to be kept? It fascinated her so much that she had adapted around forty-three books herself and yet not one of them had ever been sent to anyone other than her grandmother, Sylvia, her biggest champion right up until the day she had died. Lorelai plucked The Catcher in the Rye from its place on the shelf and went back to the kitchen. It wasn’t one of her favourites but it was one of the very few books she owned that hadn’t been adapted for the screen already. She wasn’t doing it for anyone but herself although the dream of seeing at least one of them make it to the screen one day was particularly palpable at this time of the day. So much so she moved slowly so as not to disturb the air, for fear that she might scare that almost tangible feeling of possibility away. A feeling that often made her shudder but when it came to writing she welcomed it with open arms.

Lorelai sighed to herself as she made her tea, sat at the table and opened her notebook. Two words she had said to herself maybe more so than any others. Two words that gave her so much hope and yet also kept her in a perpetual state of longing for a dream she was making no move towards achieving. She swept her long, tangled, dark hair into a scrappy bun on her head. She took a sip of her tea then took the lid off her pen and savoured the moment just before the tip of it hit the page, knowing once it made connection she wouldn’t come up for air until Joanie was up and forced her to pay her some attention. It was the kind of blissful trance that only came with doing something you truly loved. Her job at The Duchess, a cinema that showed old movies from eras gone by, brought her joy, yes, but it didn’t come close to touching these moments.

‘It’s like that feeling you get when you’re reading a good book,’ Lorelai tried to explain to Joanie one day. ‘It almost hurts to stop reading, and then when you do have to put it down all you can think about is reading it. As if living your life is just getting in the way of the time you could be spending in the world someone else has created.’ Joanie had nodded slowly but Lorelai knew she’d zoned out at the first mention of reading.

‘What ungodly hour were you up this time?’ Joanie yawned from the doorway, rubbing yesterday’s make up further into her eyes, before stumbling towards the coffee machine. Joanie’s nightwear was all black and dark grey. Lorelai often joked they matched her black heart but despite her wicked sense of humour and her often blunt delivery, Joanie was the kindest person Lorelai knew. They had met at The Duchess, and their friendship had been instant. It had only taken a few months before they decided becoming flatmates was a good idea and they had swiftly found a place to share in Bromley. They were complete opposites, but they just worked. Where Lorelai was quiet, Joanie was loud. Where Joanie was a little naive, Lorelai had more life experience. They both loved nights out, cats, and agreed wholeheartedly that pineapple did not belong on a pizza. It was a match made in heaven.

Lorelai blinked, realising only now just how sore her eyes were from staring at her notebook so intently. She turned to check the time on the kitchen clock. It was almost seven.

‘Not that long ago,’ she lied. She nodded towards the coffee machine. ‘I’ll have one if you’re making.’

‘You ever gonna let anyone read this one?’ Joanie asked over her shoulder, pushing a piece of thick, white bread down into the toaster.

‘Maybe,’ Lorelai mumbled. Joanie had attempted to have this conversation with her a million times before, but Lorelai wasn’t ready to share her writing with anyone – not even her mother. Lorelai had become an expert in swiveling her mother’s attempts at conversations away from herself a long time ago.

‘Someone as talented as you should not be stuck sweeping up popcorn for the rest of her life.’

‘I like sweeping up popcorn!’ Lorelai said with complete conviction. It was corny, probably the writer in her, but she felt that the spilled popcorn was proof that people had had a good time and that’s what she loved.

‘Is it what you want to do forever though?’ Joanie asked.

‘No. But I’m only twenty-five! I have plenty of time to hone my craft and then send my work to film studios. It’ll happen for me one day, I swear.’ Lorelai crossed her heart with the end of her pen.

‘As long as it actually happens one day, I’m happy.’ Joanie sipped her coffee but then sniffed the air. ‘Bollocks!’ She jumped over to the toaster just as her bread was in danger of becoming charcoal instead of toast. Lorelai took the moment to rest her head on her arms, the weight of her lost sleep finally catching up with her and pressing against her temples.

‘Was it a bad one?’ Joanie asked gently, scraping the blackened crispy bits into the bin.

Lorelai shrugged. She had always slept fitfully. Getting to sleep was never the issue – it was the nightmares. Brutal, twisted, terrorising nightmares that would wake her up, soaked in sweat and in floods of tears. Joanie was always nearby for some comfort and a cup of hot milk (or whiskey if Joanie had her way) when they got bad enough that Lorelai needed company, someone to talk her down, but most of the time she dealt with the aftermath alone. Once awake, she stayed awake, not daring to close her eyes again and be consumed by the waves of terror once more. It had led to her to her love of writing all those years ago, but now the nightmares were getting worse. More vivid. More frequent.

‘Do you think it means something?’ Joanie asked, her voice still soft and kind. ‘That they’re suddenly getting worse now, when they’ve been manageable before?’

Lorelai shrugged again, but she knew in her gut it wasn’t a coincidence. How could it be? For years, nightmares had plagued her but the details faded almost instantly once she was awake. Now, all of sudden, not only could she remember everything, but the images were beginning to resurface when she was fully awake. The hairs on Lorelai’s arms stood on end as the memory of the most recent nightmare forced its way out, front and centre. Dreams were easy to ignore when they were just that. Dreams. Non-existent, make believe concoctions from your subconscious that never came true. Lorelai’s nightmares were not the same.

Because they were formed from things she had seen long ago.

Things that had, in fact, come true.