A rural romance about letting go of the past and the healing power of horses, read a sneak peek from Two Hearts Healing by Renee Dahlia. 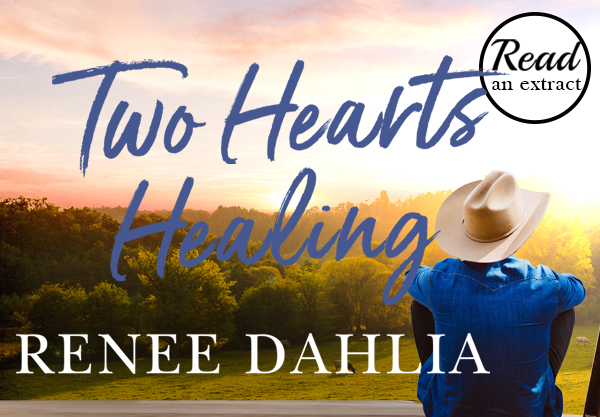 Australian author Renee Dahlia takes us back to Merindah Park for this rural romance about letting go of the past and the healing power of horses.

Home. It’s been a long journey to recovery after the horse racing accident that nearly killed me, and now I’m ready to embrace life. Yes, I have a head injury, but that’s not going to stop me creating a survival list of all the things I was too polite to do before. Number one on the list is to ride again. Also on the list: kiss Lee Edwards, my former boss and hot-as-hell neighbour. Not that I’m going to write that one down where anyone might see it.

The last six months have been hell. Not only did one of my horses nearly kill my stable jockey, Serena, but the accident wrecked my friendship with her brother and reminded me that I’m a failure. Just like my father said I’d be. I moved to Australia, the other side of the world, to get away from his negative voice and create a new life as a horse trainer. And now Serena is on my doorstep, demanding to learn to ride again. I can’t do it. I won’t be responsible for hurting her again. So why is it so hard to say no?

Serena zipped her suitcase closed slowly, pressing down on the top to squeeze everything inside. Five long months after the horse racing accident which nearly killed her, she was going home. Home to Merindah Park, the farm she’d grown up on. Away from this rehabilitation centre where she’d been surrounded by old people marching slowly to their deaths. No, that wasn’t fair, some of the older ladies had been really supportive as they’d recovered from broken hips and other injuries of the elderly. She bit back a sigh. It wasn’t fair to have a brain injury at twenty-five either. She was grateful for the Australian medical system, because as much as it sucked to have a long-term injury, at least her family hadn’t had any financial stress in the situation to complicate things. Yah for modern medicine, and yah for Medicare. She’d be dead without one and broke without the other. As it was, she faced a long recovery time without any prospect of income. If she didn’t have her family to support her, she’d be solely reliant on government assistance and her pathetic workplace injury insurance payments. Her twin sister hovered in the room, her keys clinking loud in her hands. Rachel was the wild one, the one most likely to be injured by a horse, by anything. Serena hated this unfairness that dogged her—it wasn’t Rachel’s fault, or anyone’s fault. Just an accident caused by broken equipment. Unpredictable. Random.
‘Can you stop that?’ Serena hated the way small noises irritated her now. She couldn’t even play her favourite online games anymore, all the flickering lights, and beeps made her anxiety ratchet upwards, and turning the sound off only helped a little bit. She kept her phone permanently on mute now. Rachel’s fidgeting showed how excited her twin sister was to be driving her home. Serena wanted to be home too, more than ready for the next phase in her life. Her recovery still had a long way to go with several doctors warning her it would be a lifelong process and she might never regain all the functions she had before the accident. She hoped that didn’t mean she’d never be able to ride again. If there was one thing she wanted, it was a life with horses. She couldn’t imagine any other life. All she’d ever wanted to be was a jockey, and this had to be a cruel irony, that a racing accident took away the only career she’d ever wanted.
‘Oh, sorry. Is the noise irritating?’ Rachel slipped the keys into her pocket.
Serena sighed, trying hard not to yell, ‘Yes. Didn’t one of my ’ists tell you?’ Serena eased out a long breath as her twin took the time to ensure none of the keys would knock against each other as she tucked them away. Rachel was on her side, and Serena needed to remind herself she’d always wanted to have her twin close beside her. Who knew it would be stifling? Or was that just this room, this facility? She missed the wide grassy paddocks, watching young horses frolic together, and the way a horse’s breath misted out like dragon smoke in the early mornings as they worked in pairs around the training track. The rhythm of a horse under her, so much strength and power, and the rush when a horse accelerated. Soon she’d be home. Soon she’d ride again.
‘’ists?’ Rachel’s question made her blink. What were they talking about? Oh, yeah, her ’ists.
‘Neurologist, physiotherapist, speech pathologist, psychologist, social therapist, all the ’ists who have been helping me.’
Rachel grinned, ‘That’s funny. Hey, before we go, I have a present for you.’

‘The whole family? Maybe.’ Serena hoped she didn’t hear pity in Rachel’s voice, and she couldn’t bring herself to say no to her own stupid idea, not when Rachel was so keen to help. She wanted everyone to see her as a survivor, not someone ill and helpless. She’d pushed herself so hard over the last five months to prove she would survive, and not just that, she would make a comeback to riding. She didn’t want anyone undermining her efforts.
‘What else? Promise me you won’t swim with sharks.’
‘What about whale sharks? They are gentle, plus what happened to the Rachel of old? You used to push me to branch out away from Merindah Park and Tranquil Waters.’ She remembered many arguments with Rachel because they couldn’t understand each other’s life choices. She’d never been wild like Rachel, and when Rachel’s life had gone sour at sixteen and she’d moved away for new opportunities, Serena had naturally gravitated to being responsible. Sensible. She always assessed risks before taking them on, even the horses she rode on race day were ones she’d ridden plenty of times in trackwork, so she knew their quirks. Ironic to have an accident due to gear failure on a horse she’d spent months working with and had ridden on race day for all his six starts since he’d arrived in Lee’s stable. Relief that Tammy hadn’t been hurt loosened the tightness in her upper chest.
‘I don’t want you to get hurt again. You are my twin, Se, I don’t know what I’d do without you.’
‘Funny how an accident makes you realise this.’
‘The accident cemented feelings I already knew. I’ve always loved you as you are—sure I didn’t understand you for ages—but you’ve always been there for me even when I didn’t want it, and now I—’
‘Don’t be so serious, Rach, it doesn’t suit you. Has Jacob’s law degree been rubbing off on you?’
‘Probably.’ Rachel’s voice held a wistful note.
‘How about eat a five-star meal at one of the world’s greatest restaurants?’ Serena changed the subject quickly and tried to ignore the jealous twinge in her gut. If she’d been brave enough before the accident, maybe she would have kissed Lee already. Maybe she’d already know if she could take a chance on love. She swallowed. Her imagination was getting away on her again. Real life wasn’t like books, it was much more confusing, and blokes were never as easy to be interested in. Besides, a taciturn horseman was hardly a keeper in the romance stakes. How many opportunities had she passed up to kiss someone simply because she’d been worried it wasn’t perfect? It wasn’t like she’d kissed no one. Of course she’d done the whole teenage sloppy necking behind the bike shed with a few different boys, just like everyone else at their high school. Tony had been pretty good at kissing—she might have gone all the way with him, except for the bigoted way he’d responded to Rachel’s outing. That single event at sixteen had taught them both the value of real friends. With hardly any other opportunities in a small town, she was still a virgin. Not by choice, it’d just worked out that way.
‘What about a hot air balloon ride? It’s gentle yet exciting.’
‘Yeah, that could be a fun rush without hurting my brain.’ Serena was glad for the suggestion. She needed to focus on something other than Lee. All this introspection about him felt out of character too. She hardly gave him any thought outside their working relationship, except for the odd occasion when she beat her past self up for not being brave enough to ask him on a date. The chemistry on the day they’d met had faded until she wondered if she’d imagined it. He’d probably say no anyway.

‘Maybe I should go on a date with a stranger?’ Serena asked. Maybe she should find some hot guy, who wasn’t Lee, and fuck him just to get the whole virginity thing dealt with. She cringed a little at the idea of touching someone she didn’t know.
‘Sure. Have a crack. If anyone deserves to find happiness, it’s you. I—’
‘Yes, I know. You used to bang on about it all the time before …’ before my accident.
Rachel groaned, ‘Don’t remind me. Jacob says I shouldn’t try and make you into me. We are our own people.’
‘He’s very wise.’
‘Fuck, don’t tell him that!’ Rachel laughed. ‘Hey, you could combine two things: take a stranger to the opera.’
‘That sounds like a disaster in the making.’ Serena couldn’t imagine the impact of having a meltdown at the opera, brought on by too many loud noises and bright lights, in front of a stranger who wouldn’t know what to do.
‘Or a brilliant story for your memoir.’
Serena rubbed her temples. This conversation was making her head ache. ‘My what?’
‘Inspirational book about your journey. I have a friend, Vanessa, who is an author. She mentioned the other day that she’d love to ghostwrite your story, and then you’ll have another thing to tick off your survival list—published a book.’
Serena closed her eyes and focused on forming her sentence. ‘Okay.’
Rachel’s response seemed to come from far away, and Serena knew she needed to sleep again. ‘Are you alright?’
She managed to do a thumbs up before she drifted off again. An image of a list hovered in her dream state with 1. Kiss Lee at the top followed by 2. Ride again. 3. Buy a yearling at the Easter sales …