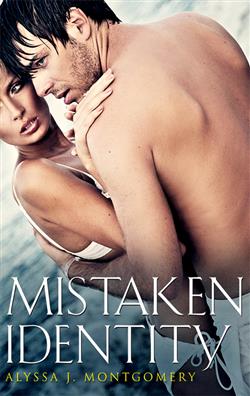 Leah’s thinks it’s great her husband’s a finalist in this award, but her twin sister Susie is anxious about the nomination.

‘Alyssa J. Montgomery is guilty of building Alex up and placing his bedroom skills on par with Casanova, Don Juan and Rasputin all rolled into one,’ Susie told the Escapades Blog earlier this month. ‘I’m not sure how Alex will cope if he doesn’t win the ARRA. Quite frankly, Leah has him on a pedestal, so I’m urging readers to vote for him — if not for his sake, then unite in sisterhood and do it for Leah. After all, think of the catastrophic ramifications that could occur for Leah if Alex doesn’t win the title…

What if Alex loses and suffers performance anxiety? Can you imagine Leah’s grief if he sinks into depression and spends his days more down than up? And…What if he resorts to comfort eating? Then instead of his abdomen rippling…it will be tripling!’

But Leah had another take on it…

‘Susie has it all wrong. While Alex may be secretly chuffed at the nomination, his ego isn’t invested in this title. Susie doesn’t get that what’s ‘sexy’ about Alex isn’t just his lethally good looks and his heart-flipping smile (although they certainly rate!).

‘Alex will always be sexy to me because he’s so self-assured, so confident, and I know I can completely depend on him (except to go shoe shopping with me!). He’s fiercely loyal to me and his family and he can admit when he’s wrong and has made mistakes (not a common male trait). He definitely has a sense of humour and no matter what,’ <a blush suffuses her cheeks with colour> ‘he’s a man who can always rise to the occasion!’

I must say that although Alex isn’t quite sure what all the fuss is about, he is certainly my pick for “Sexiest Hero for 2013″…and 2014 and…well, let’s face it, win or lose the final, he’ll always be my sexiest hero!’