Can a dream hold the answer to a violent crime? Read a Sneak Peek from A Light In The Dark by Elisabeth Rose 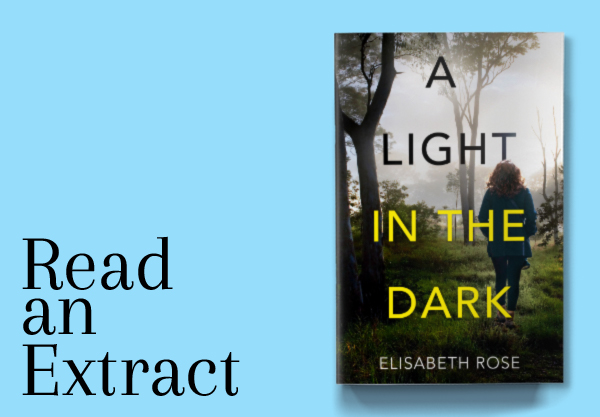 Every time it was the same.
Weary from the long drive, ready for a welcoming family, a meal and a glass of wine, she hurried through the drizzle, dragging her suitcase up the path to her father’s house. The porch light clicked on as she reached the steps and a familiar, lovely stained glass panel in the front door sent a jewel-like glow across the wooden verandah.
Mildly puzzled she raised her hand but before she could ring the bell, a scream followed by a loud, sharp, crack of sound froze her in place. Her heart beat a frenzied tattoo. A gunshot? Moments later another crack sounded then another and another, more and more in a deafening crescendo of noise. She turned and ran, breath sobbing in her throat, the hairs on her neck prickling, her mind a tornado of uncomprehending fear.
Crouched behind a car in the wet, dark street she fumbled for her phone with clammy fingers. Footsteps sounded, the rustle of bushes, movement caught her eye in the shadows next door. She tried to stand up and call out but her legs were weak, wobbly, and the operator answered, distracting her.
That’s when she woke. Every time. The dream wrenching her from sleep with a
pounding heart, tears wet on her cheeks and the sound of gunshots ringing in her ears.

Mia closed the door on Arlo with a sigh of relief and realised her hands were shaking. The whole time he’d been in the house she’d felt as though she were under a microscope. Not even the interview for her first job had made her feel so unsettled. Something to do with his eyes, the penetrating way he looked at her or the way he listened intently to what she said. She wasn’t used to that from anyone. From a man. But he was a highly seasoned and experienced journalist. He could fake interest and empathy with the best of them.
Should she have let him in? Yes. It hadn’t occurred to her before, but her father deserved to have his story told and she was the only person able to do it. No-one in Taylor’s Bend had known him for very long. From her research and a vague recognition of his name, Arlo was one of the best and it was a stroke of luck he’d chosen to settle here.
He’d been at the funerals, both of them, and because he’d known her father he was allowed into the chapel rather than kept outside with the visiting press. Arlo had offered his condolences and she’d listened to his words but been struck by the wide set grey eyes and unruly, thick brown hair, greying at the temples and sideburns. His skin was tanned, with lines around his eyes and mouth. A gauntness to his face and body explained by the long illness. Mid-forties. In other circumstances she’d be attracted but she’d pushed any such thoughts away that day as totally inappropriate.
But that was then and this was now and the same stir of interest was lurking. Single.
He said ‘I’ not ‘we’ when talking about his flat. Her grandmother always said if a man wasn’t married by thirty there was something wrong with him. He’d either be a mama’s boy or he had odd personal habits. Which was Arlo? And what did that make her, a single, never married woman in her late thirties?
Few locals had made the journey to Wagga for her father’s funeral and at least half of the sixty in attendance were old friends from Sydney. Even Linda, one of the aunties, came, sniffing into tissues and hugging Mia fiercely.
‘I don’t believe he did it,’ she’d said darkly. ‘He wouldn’t harm anyone. He didn’t have a vicious bone in his body. You know that and so do I, Mia.’
Mia had nodded and thanked her but the words had stuck and it was shortly after that the dream started.
Glenda’s family, the locals, the police and now Arlo thought the matter was clear cut. A murder suicide. She had too, through the haze of grief. A domestic violence crime of the worst kind. An outwardly well-liked, loving man suddenly kills the person closest to him and then himself. What else could she think?
Since the dream began she wasn’t so sure.
Had Linda put the idea in her head? Did she want so desperately for it to be true she believed a dream over facts?
The police forensics found no evidence at all to indicate a third person had been in the kitchen apart from the friend who’d called in later and found them. The time of death was put at about half an hour previously. One neighbour was deaf with the TV blaring, the other side were at work, over the back were away. No-one heard or saw anything unusual. It was her father’s licensed gun, his fingerprints alone on it, and the wounds told the sad story. No sign of a struggle. He’d shot his wife in the chest and then put the barrel to his own head. A hideous crime.
She hadn’t told anyone about her doubt. She knew what the police would say. They needed more than a feeling and the evidence from the dream of a bereaved daughter to reach a different verdict. It was a tragedy. Case closed.
Mia shivered. The rain had turned from mist to proper drops while she’d spoken to Arlo. He’d get wet walking home. Was he the man to tell? That was why she’d let him in, and if he hadn’t come to see her she might have gone to his office—to covertly interview him, see if his was a sympathetic soul.
He hadn’t been completely honest with her. Why hadn’t he mentioned the shooting incident in the strife-torn African country? Colleagues he knew well had been killed. He’d had a rough time over the last four or five years. After his return from Africa, suffering from a debilitating illness, he’d had a long, slow recovery.
No wonder he’d chosen to live quietly in rural New South Wales. How would he react to her theory based as it was, solely on a dream?
The bottom line was she was nearing the limits of her sanity and if she didn’t do something she’d fall through the rapidly fraying fabric into madness. Would Arlo be able to save her? Would he want to?