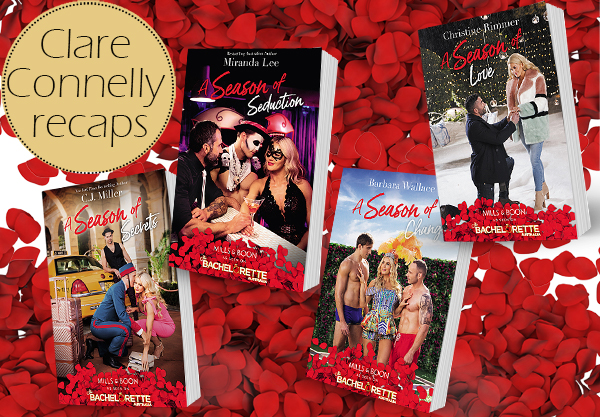 Here we go again! Another season of the Bachie franchise has kicked off and I’d forgotten how many hopeful guys there are in these first eps. OH SO MANY. OH SO HOPEFUL.

We start with Bill, an early front-runner because he’s got the ‘wild rose’, and a kiss. He ‘didn’t expect it’. Ali is the girl of his dreams and he’s going to be strategic about when he uses the wild rose.  Before anyone can get too cocky (I’m looking at you, Bill), Paddy (27, Gym Manager) is all over this situation like a rash, putting me in mind of (needs no introduction) Jarrod. He’s not red-faced (yet) but he’s coming across as super possessive and IMO a bit douchey.

I just love it how the guys sit around looking so comfortable, shooting the breeze. Like, nothing to see here. Situation totes normal. Do this all the time.

Osher strolls in with a magical, over-sized blue envelope. Anticipation fills the air.

Someone’s getting a date – Hint, someone who wrote something for Ali. Charlie confesses he wrote her a journal (Wait. Hold up. Is my Jarrod-meter mis-firing? Writing a journal sounds… intense?). Intense or not, Charlie gets the date and Paddy is super happy for him. Like super. He even goes in for a (probably benign) head rub to prove it.

But waaait a second! Charlie’s not out of the dating slushpile just yet. Let us not forget Bill holds the power. ALL THE POWER. He can take the date any time.

He’s cool with Charlie getting the date, though. He doesn’t see Charlie as a threat at all.

Unlucky in love but ever-hopeful Ali is at The Sofitel Wentworth, ready for her date with Charlie.

**Side note, her braid in this segment is on point.**

“I can rely on Charlie” Is this the beginning of something special? ?#BacheloretteAU @charlienewling

The producers have organised a ‘romantic’ sky-high game of Twister – just go between these two high-rises, they said. It’ll be fun, they said.

This is the point where I would be like, “Hey, you’re kinda hot but I can’t spend the rest of my life with someone who thinks that’s a good idea.”

They’re clutching hands looking up at the floating Twister mat. Neither of them suggests a cruise on the harbour instead. This feels almost Darwinian.

Back in the bachie pad, another envelope appears (and with quite some panache, it has to be said…)

The men folk gather ‘round. There’s some long-haired guys in this series. Cheyne (28, Construction Auditor) foresees a hairy happy future with Ali: “We can brush each other’s hair.” Because, nothing says romance like bonding over split ends.

The boys are being roll called for the group date. Paddy’s desperately trying to pretend he’s okay with having not yet been called, and it is too much, you guys. He’s going to pop something with the strain of looking ‘so not bothered, like, whatevs’.

Back on the date, Ali’s doing a last-minute (seriously, last-minute, it’s too late) risk assessment on the Twister-in-the-sky situation.  She’s a little worried that if she fell, she’d die.

What is the Twister board made of? And is anyone expecting they’ll actually do any kind of contorting whatsoever? And where does this rig come from? Is this actually a thing? A thing normal people do? And pay money for? Like could platform weddings become a thing?

High up in the sky, Ali is freaking out and I am completely with her. I think Charlie needed to actually put a stop to this. It’s a tough construct of the show that you can’t actually subvert the setup because I think the best, most romantic, ‘prove your love’ act would have been to say, “You’re clearly freaking out, forget the high altitude hijinx. Let’s go grab something at Aria.”

He didn’t and they’re out there. Charlie’s doing a great job keeping Ali calm. He’s not freaking out at all… I’m impressed by that. I’m less impressed when Charlie says, with a serious tone, ‘What’s the worst that can happen? Nothing.’

NOTHING? Are you kidding me? I can think of like a dozen ‘worsts’ that could happen.

Annnnnd … we have a kiss. They’re kissing 61m up in the air and while I know they’re harnessed in, I just want them to get off that piece of board and put their feet on steady ground.

Charlie is really all in with this kiss.

Moving onto the formal date part of the night, they’re in the velvet room of the Sofitel Wentworth for the post-game analysis. Reading between the lines, she wants someone who’s going to be genuinely what they seem. I really do hope she finds love in this series.

The house looks stunning by night! The candles, flowers, lights. The boys are speculating about Charlie’s date. “You can’t fall in love in one day.” Who said that!? Not a romance writer, obviously.

Charlie’s home. He shows off his rose and somehow the producers miss the chance to cut to Paddy’s reaction, but I think we’ve all seen enough of Paddy by now to know that he’s rocking in a corner somewhere. Or, looking intensely at his own reflection telling himself ‘Paddy’s going to be okay because Paddy’s Paddy-tastic’.

Now, the group date, and the fabulous Kita Kemp from Mills and Boon announces the surprise: Group photoshoots for covers of four special edition Mills & Boon romance novels! I just love the guys’ reactions to this. Everyone loves Mills & Boon.

“This is actually happening,” Osher assures them.

First off, there’s Fashion week – summer themed. Ali’s outfit is the love child of a Mardi Gras float and a cocktail, but she totally pulls it off.

The three guys come out – Jules as the photographer. He’s a little literal with his casting and, wanting to show off his creative side, seems to think he’s actually taking the photos himself. Bless him.

Paddy held it together for about two minutes, watching Ali rub oil on her willing male models’ bodies. Then, ‘I’d love to be doing this, to be honest.’

Next we role onto ‘Spring Break’. Robert’s been cast as Ali’s New York city date. Paddy’s the bellboy. In response, he says ‘fuck me sideways’ and then spends much of the photoshoot perving at Ali’s butt and muttering she’s ‘so fit’ over and over again.  He jokes about his pants getting tight – vom. He’s not even a little bit chivalrous. Did no one tell him we’re in the market for a romance hero!?

While Paddy ogles from behind, you can’t deny Ali and Robert have definite chemistry. ‘He gives me goosebumps”.

The other guys are JELLY to the max.

‘He can gatecrash my party any time,’ Ali enthuses. But Dan isn’t going to let Todd dominate the session… He’s going to charm Ali, apparently by detailing every meal he’s eating in his thirty two years. Wtf.

Okay Taite, 28, has the best photo call. He’s on his own, and in a very romantic setting – a winter’s stroll through the park. He walks on set and goes straight in for a lip kiss – guys, there is no PASH PRESUMPTION! You can’t just kiss someone! Ali offers her cheek.

Meanwhile, the photographer suggests, ‘Can I get you a little bit closer.’ They’re already kind of morphing into one being soo….

All the guys are watching now and they are NOT happy. Beer is required. Beer. Lots of beer.

Now Taite’s picked Ali up, the face nuzzling is never-ending. Like, photographer, I think you’ve got the shot…

One photoshoot and a whole lotta vavavoom ????#BacheloretteAU

Guys are bonding around the fire – ‘everyone’s a bit more chilled out’ (allegedly) at the second cocktail party. Jules asserts there’s a ‘tone of calm’ but events belie that.

Ali goes off on a stroll with Robert and Charlie watches them disappear into the shrubs. His jealousy is a palpable force. Ali and Robert got up close and personal in the spring photoshoot, and now she’s going in for the kiss she wanted then! Gotta love a girl who goes for what she wants (she’s a perfect M&B Dare heroine).

‘Robert is ticking all the boxes right now,’ she smiles.

As for Robert, ‘It felt so real with Ali. So much electricity and energy. It just felt right. It’s been a while since I’ve felt so alive…’ He is literally a Mills and Boon hero. He brings an end to their kiss, saying they should rejoin the party, and I like that too, rather than trying to keep her all to himself. Apparently, he’s playing the long game.

Ali’s taken Cheyne off for a chat and Charlie’s jealousy meter is now sky-high, much like their first kiss. The music tells me something’s afoot… he’s promised the boys he’s going to be respectable and not cut the lads off, Jarrod Paddy, tells us. But no! Charlie’s gone to interrupt the solo session. This never bodes well. Not for anyone.

‘How are you?’ Ali asks with polite restraint.

I’m not alone in my eye rolling, right?

Robert gets the first rose (and after that kiss, who can blame her?)

He is so relieved.

There are pointed looks when Paddy gets his rose.

Oh no. There’s only one rose left!

And it’s all for Jules and his fabulous man moustache!

Poor Thor (I’m not even going to learn his name, he shall be forever after known as Thor – it’s Cheyne, I googled). I guess she didn’t want to grow old bonding over hair- brushing.

That’s it for this week, lovers of love! Don’t forget the special edition Mills & Boons books with the Bachelorette-tastic covers are available now wherever good books are sold. 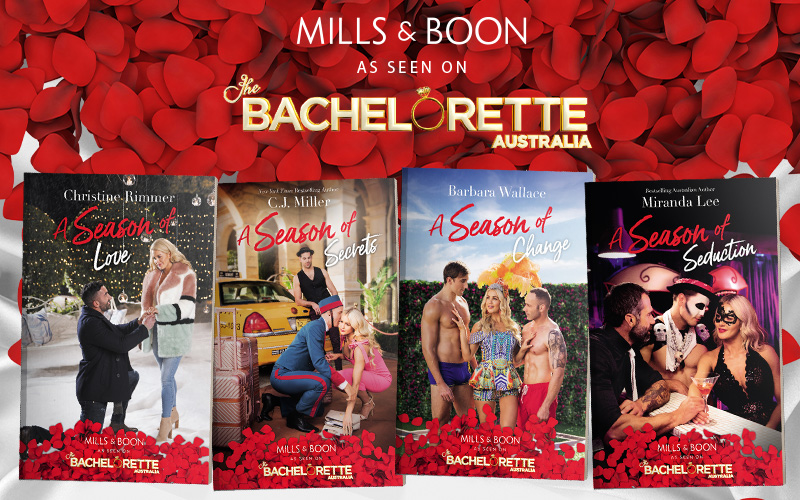 The Maid, the Millionaire and the Baby by Michelle Douglas A baby — in his home…with no instruction manual! Called on…Read more