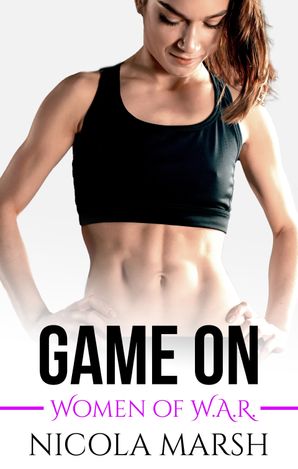 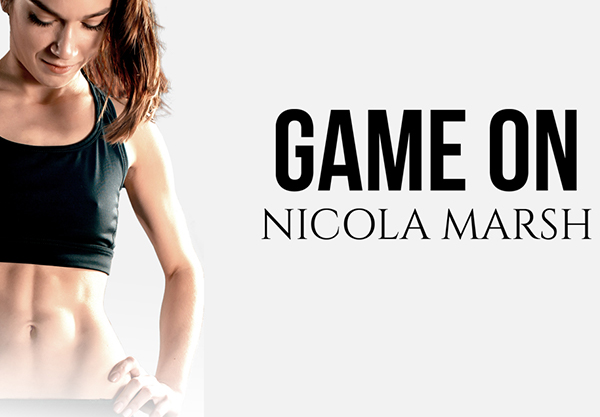 It’s fair to say that this, the final excerpt from Nicola Marsh’s sexy sporty GAME ON is definitely NSFW.

How did we get here?

I tugged on her hand, hard, hauling her body flush against mine. She gasped in surprise and I took the opportunity to kiss her, invading her mouth like I’d yearned to do since I first saw her. She tasted of hops and something sweeter, something enticing.

She moaned as my tongue tangled with hers, releasing my hand to claw at my shirt. Tugging it out of my jeans. Fumbling with the button. Zeroing in on the zip. Eager, I liked that. Liked that she knew what she wanted and wasn’t playing coy or mucking around to get it.

When she palmed my cock through the denim, I almost lost it.

‘Impressive,’ she murmured against the side of my mouth as she continued to stroke me with single-minded determination, tracing the shape of my cock that throbbed with her touch.

‘Glad you approve.’ I backed her toward the couch, not breaking eye contact, seeing the exact moment her eyes widened when I slid my hands up her thighs to palm her arse.

Hot damn, she wore a G-string, giving me instant access to smooth skin. I traced the curve of her and snagged the elastic, heard her sharp intake of breath as I let it go with a snap.

‘Tease,’ she said, her lips curved into a naughty smile that promised this would be great. Stupendous.

‘I’ll show you tease.’ I lowered her onto the couch and knelt at her feet. She propped on her elbows, watching me as I slid the denim mini down her long legs, revealing a tiny triangle of damp black satin. I wanted to get behind that scrap of material so damn bad my balls ached.

I stared at her, seeking silent permission before taking the last step. In response, she arched her hips slightly. Offering herself to me. Such a fucking turn-on.

I almost tore her panties in my haste to get them off. She didn’t care as I trailed a finger from her belly button to her clit in a slow, deliberate swipe that had her wiggling in anticipation.

‘You like that?’ I circled her clit with my thumb, lazy strokes designed to tease and torture.

‘Yeah …’ she ended on a groan as I increased the pressure, desperate to be between her slick folds but wanting to make her come first.

I lowered my head and licked her, using my hands to pry her thighs further apart while laving at her clit. Lapping at it. Sucking, until she writhed beneath my mouth, urging me on.

I picked up the pace and she grabbed at my head, holding me to her as she came on a loud, triumphant yell that made me feel like a goddamn sex master.

When she finally released my head, I raised it to see her lying splayed on my couch, eyes closed, smug smile; pussy wet and waiting for me.

Her eyes snapped open when I unzipped and she watched me grab a condom from my wallet, slide it on and guide my cock toward nirvana.

‘That was so good,’ she said, pushing into a sitting position, bringing her tits delectably close.

‘It’s about to get better.’ I peeled off her tank, unhooked her bra and took a second to admire pert B cups with erect rosy nipples before sliding into her an inch.

Her eyes widened, appreciation making them darken to molten chocolate as I slid in further, taking my time so she could adjust when all I wanted to do was ram into her.

She felt so tight, so good. I leaned forward, flicked the tip of my tongue against a nipple. The other. Alternating between her tits, nipping and sucking, laving until she couldn’t sit still.

She reached around me and dug her fingers into my arse, trying to pull me closer. I obliged, sliding into her to the hilt, the fit so snug I couldn’t help the groan ripped from deep within.

I found her mouth as I started to move, sliding in and out in a slow, deliberate rhythm set to titillate. But she felt so hot and slick, kept moaning into my mouth with each thrust, that I couldn’t hold back for long.

When she bit down on my bottom lip, intentionally or not, I kinda lost it. The momentary pain heightening the pleasure, the friction of my cock sliding in and out of her making me light-headed.

She wrenched her mouth from mine in an effort to haul me even closer, if that were possible. The pressure in my balls built, the muscles in my lower back tightening as I pounded into her. Over and over. Mindless with lust. Craving release. Each torturous, wonderful second driving me insane.

I came on a roar, barely registering the pain of her sinking her teeth into my shoulder as I saw spots.

I had no idea how long it took for me to form a coherent thought. When I could function again, I blurted the first inane thing that popped into my head.

‘Just so you know, I have a sweet tooth and plan on coming back for seconds and thirds of that ice-cream all night long.’ 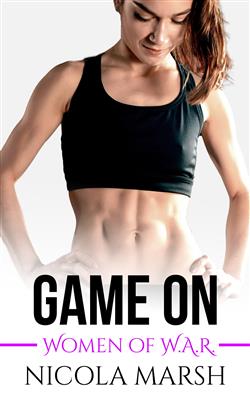