I Watched The Pilot And Finale Of Friends And Had So Many Thoughts! 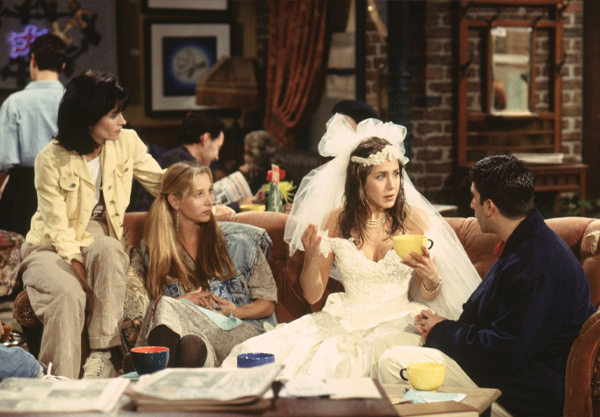 This month we’re celebrating all-things Friends! We got author Penelope Janu to watch the first and last episodes (and none in between) and give her thoughts on how the series evolved over time.

P.S. You can stream every episode of Friends on Binge from September 17.

This article was originally published on news.com.au on September 15th 2020

The first episode of Friends screened in 1994 and the final episode went to air in 2004. While my four daughters, born between 1988 and 1995, were too young to watch Friends the first time around, they certainly watched a lot of re-runs in their teens. I admit I dipped in and out of the series, but I’ve enjoyed quite a few episodes over the years and it was interesting to watch the first and last episodes all over again. Besides the obvious things like the physical appearances of the characters, there were a few more substantive changes over the decade.

The One Where Monica Gets A Roomate (The Pilot)

The opening scene at the coffee house, Central Perk, basically sets up the next ten years. Joey (the actor) Phoebe (the masseuse/musician) Chandler (who works in IT procurement) and Monica (the chef) are present, and we find out Monica is going out to dinner with a friend from work, who subsequently tells her he hasn’t had sex for two years. This encourages her to sleep with him, and afterwards she finds out it’s his pick-up line and she ‘accidentally on purpose’ destroys his watch.

Ross (the palaeontologist) is unhappy because his wife has left him and moved out. Joey’s suggestion to make Ross feel better is a strip joint. Ross replies, ‘I don’t want to be single, okay? I just want to be married again.’ Joey tells Ross to ‘grab a spoon,’ likening women to ice-cream flavours.

Rachel, wearing a wedding dress and veil, walks into the coffee shop after walking out on Barry, her husband to be. She states that she is more attracted to a gravy boat present than to Barry, and realises he’s always reminded her of Mr Potato Head.

Rachel, supported by the other friends, cuts up her credit cards, finally becoming independent of her father. She moves in with Monica.

Rachel gets her very first job—serving coffee, not making it, much to the relief of her friends!

We find out about Ross’s long-held feelings for Rachel (it’s no surprise to her) and she agrees that it would be okay if he asked her out ‘…sometime…maybe’.

The Last One (The Finale)

Rachel has been offered a job in Paris and plans to move there with Emma—Rachel and Ross’s daughter.

Ross and Rachel have happily spent the night together. Ross speaks to Phoebe and says he’s realised he loves Rachel and wants her to stay.
Phoebe convinces Ross to tell Rachel how he feels. They set off for the airport but realise they are at the wrong one. Phoebe calls Rachel and tells her to get off the plane—there is a problem with ‘the left phalange’.

Rachel finally acknowledges she is in love with Ross and gets off the plane.

Monica and Chandler’s adoptive baby unexpectedly turns into two babies, but they decide to adopt both and confirm their decision to move to the suburbs to bring up their children.
Seeing the twins, Mike tells Phoebe he wants one and Phoebe agrees, saying she wants to make a whole bunch!

Joey buys a baby chicken and duck (Chick Jnr and Duck Jnr respectively) for Monica and Chandler as a wedding present (echoing Chandler and Joey’s past chick and duck companions), and they get stuck in the beloved foosball table. Monica happily destroys it to rescue the birds. Chandler tells Joey he can take care of them and they hug it out.

The friends work out they’ve all at some point lived in Monica’s apartment and leave their keys behind (Joey leaves a lollypop). The last line in the final is Chandler’s. The friends decide to grab a coffee, and he says, ‘Where?’

Comparing the pilot to the final episode, Joey, like Phoebe, shows a great deal of character growth. In fact, Joey looked much more comfortable in the final scenes caring for Chick Jnr and Duck Jnr than Chandler did when he held his child (even though it was clearly a doll).

The Not So Good

There were a few things in the pilot and the last episode that the scriptwriters wouldn’t (I hope) have written in more recent times.

A joke is made of the fact that Ross’s first wife has left him to be with a woman (he muses that he should have known she was a lesbian by her drinking beer from a can)—so what? Also, Phoebe’s mention of suicide would hopefully have been dealt with more sensitively today.

Chandler only seems to want one baby? All turns out okay of course (this is Friends!) but I wasn’t keen on the way the final episode dealt with the treatment of Erica, the birth mother, or the adoption of the babies.

In the pilot episode, Rachel has never had a job. Eventually, work at the café leads to increasingly satisfying roles in the fashion industry, which culminates in her dream job with Louis Vuitton in Paris. Couldn’t Ross have considered moving to Paris so that Rachel could have taken advantage of this career opportunity? There are dinosaur bones in Europe so he could have worked as a palaeontologist there. Why does Rachel have to stay in the US with him?

Friends is a series that has meant a great deal to many people, not only in the ten years in which the episodes were filmed, but in countless re-runs since. The connections between the characters—bonds of friendship, trust, forgiveness, laughter and love—are elements that we can all relate to and celebrate.

Penelope Janu lives on the coast in northern Sydney with a distracting husband, a very large dog and, now they’re fully grown, six delightful children who come and go. Penelope has a passion for creating stories that explore social and environmental issues, but her novels are fundamentally a celebration of Australian characters and communities. Her first novel, In at the Deep End, was published by Harlequin in 2017 and her second, On the Right Track, in 2018. Up on Horseshoe Hill was published in 2019 and a novella, The Six Rules of Christmas, in 2020. Penelope enjoys exploring the Australian countryside and dreaming up travelling and hiking breaks, and nothing makes her happier as a writer than readers falling in love with her clever, complex and adventurous heroines and heroes.

Penelope’s latest book Up On Horseshoe Hill is out now.