Inspiration Behind the Story: Robyn Rychards

She may not need a knight in shining armour to save her, but that doesn’t mean she’s going to look a gift knight in the visor… 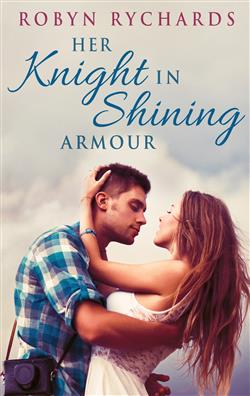 I love reading romance, whether contemporary or historical, and if I can have it with suspense and intrigue, all the better. My number one fave for years has been the Harlequin Cherish/Romance line and my dream has long been to write for that line. When I read Melissa James’ The Sheikh’s Destiny, Her Knight in Shining Armour flickered to life. It had the suspense/adventure aspect that I longed for and was from my favourite line. Then my basic writing motivator switched on. Since a Harlequin Romance with suspense was hard to come by, I’ll write one. I have always wanted suspense in the Romance line and thanks to Melissa, I knew it was doable.

Enter my first hurdle. Did I have the writing skills for suspense? I have a heck of a time figuring out mysteries when I read them or watch them, how was I going to write one?

The next hurdle followed closely behind: Melissa’s story was set in a part of the world where there’s a lot of strife. Perfect setting for a suspense story. However, I know nothing about such places and was already taking on enough trying my hand at writing more than romance. What situation would have two people on the run from an enemy in the United States?

This led me to hurdle number three. I know nothing about law enforcement or military, so the type of heroes I’m familiar with in the Harlequin Intrigue line wouldn’t work. What scenario puts the heroine on the run and how would she be rescued by a hero who isn’t a professional rescuer? Then I saw Sleeping With the Enemy. Now I had an idea of what might work.

Lots of thinking, lots of rejected ideas, but I kept coming back to a heroine on the run from an abusive husband. However, going with this idea gave me another hurdle. I didn’t want the heroine to still be married. It complicated the relationship with the hero as well, as to how to get her out of the marriage. Once I resolved that in my head—which included changing some of what I had already started writing—I had yet another hurdle. I know nothing about abusive relationships.

BUT that was something I could handle. I know people and I have a library card. I educated myself as best I could and faced the first hurdle again which was now my last hurdle. Could I write suspense?

Having read a lot of suspense, I decided to just go with my gut—I am a pantser after all. The story wouldn’t leave me alone. It had to be written and if I sucked at writing suspense, well, at least I’d know for sure, the story would be out of my head, and I could move on. Now it’s up to you to decide if I can do romantic suspense. If so, I may just take on a Gothic—a la Victoria Holt of course—next.

When Robyn was young she always enjoyed reading, but it wasn’t until her Grandmother gave her her first Harlequin Romance that she fell in love with it. At the age of fourteen Robyn didn’t have the funds to feed her romance addiction, so she started writing them. Writing romance is in Robyn’s blood and she’s happy to be able to share her stories with the world, as well as be part of the Harlequin family. Robyn was raised in Boulder, Colorado, USA and lives in a neighbouring town not far from where Her Man From Shilo takes place. Though four kids have kept her too busy to write for a long time, she is thrilled to be able to dive back into it, now that they are all in school. She hopes you enjoy reading her story as much as she enjoyed writing it!