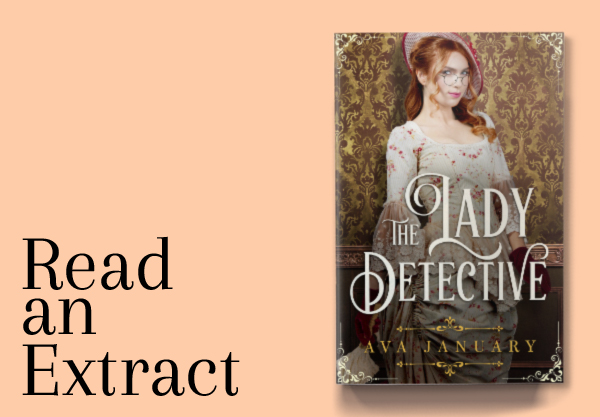 The door to the study banged open with force, rattling all the paintings in their frames on the walls. Lady Theodosia Fortescue-Brown, however, didn’t so much as glance up from the papers she was reading. A wealthy American heiress had commissioned Theodosia’s detective agency to investigate the baby recently born to a tavern maid that shared a remarkable likeness to her betrothed.

‘Milady,’ her housemaid, Mary, whispered from the doorway.

Theodosia made a mark against the page before glancing over at the stout housemaid. She had closed the door and was leaning against it as if ten men were to batter it in at any moment.

Mary looked about the room with wild eyes. ‘His lordship is here.’

The papers in Theodosia’s hands hit the desk with a slap. ‘Bertie? Where?’

‘Rodgers is holding him in the reception, fussing over his coat.’

Theodosia opened the desk drawer and swept every paper from the desk into it, then slammed it shut. She stood and tugged at the too tidy chignon at her nape.

Mary ran her gaze along Theodosia’s dress and shook her head. ‘No good, Milady. Too late for that. Ya’ll have to hide.’ She gestured to the window overlooking the busy Mayfair street below.

Theodosia grimaced. ‘Out the window?’ That was a step too far, even for her.

Mary bustled across the room as quickly as her ample stomach allowed and gestured to the seat. ‘No. Sit there, I’ll pull the curtains across.’

Footsteps echoed along the tiled hallway, increasing in volume as they neared.

‘Right, quickly.’ Theodosia sat on the cushioned bench seat, tapping her knees while Mary pulled the curtains, enclosing her amongst the voluminous folds of the fabric. She pressed the drapery from her face where it tickled her nose.

‘I can still see them. Ya’ll have to lie down.’

Theodosia looked at the small half hexagonal seat and frowned. Two petticoats and a corset made lying on that an unlikely option.

The delicate features of Mary appeared at the join of the heavy vermillion velvet. Dust motes exploded at the movement, their journey captured by the afternoon sun streaming through the window behind Theodosia.

‘Rodgers already did.’ Mary looked from Theodosia to the length of the seat and nodded briskly. ‘Legs up.’

Mary leaned into the tiny space and hooked her elbow under Theodosia’s knees and hefted them, sending Theodosia spinning onto her back.

‘His lordship said he would wait this time. For however long it took,’ she said with an ominous look as she arranged Theodosia’s skirts around her raised knees.

Theodosia sat bolt upright. ‘He wants to wait? Am I to lie on this bench all afternoon?’

Mary shrugged, far too disinterested in Theodosia’s comfort for her liking. Theodosia raised herself on her elbows and eyed Mary’s burgeoning waistline.

‘Perhaps you could pretend to go into labour and ask him to fetch the doctor? When he leaves, I’ll make myself scarce for the evening.’

Mary’s mouth dropped open. ‘What would I tell the doctor when he gets here and there’s no baby?’

‘I’m sure you’d think of something.’

Mary shook her head. ‘Lying’s a mortal sin, milady.’ She gestured to the round belly straining against her apron. ‘I’m in enough trouble with him upstairs as it is. Best if you just stay here.’

A noise sounded from the door and Mary’s eyes widened. She darted back behind the curtains, snatching them closed as she went.

‘Theodosia?’ The familiar baritone of Albert Fortescue-Brown, now next in line to the title of Earl Vale, and her brother-in-law, rang through the room.

Theodosia blinked rapidly as the dust motes began an energetic jig in the air around her, celebrating as if it were Yuletide’s eve. She pinched the bridge of her nose and began to count backwards from one hundred.

‘Good afternoon, sir.’ Mary gave the curtains another shake and more dust motes joined the cavorting ones already troubling Theodosia. She moved her hand to her mouth, her whole body shaking with the effort to hold in the …

Theodosia stared at the ceiling and held her breath, although her silence seemed pointless now. She squeezed her eyes shut, willing Albert to leave.

The curtains drew apart and Albert’s disappointed face loomed above her.

‘Oh, milady,’ Mary exclaimed. ‘What on earth are you doing there? I had no idea. I’ll leave you two to it then. Much to do.’ Mary moved from the room with speed.

So much for lying being a mortal sin.

‘Oh, Bertie. How lovely to see you. I was just having a little lie down. I was feeling a touch peaky.’ Theodosia smiled in what she hoped was a charming manner, which was remarkably difficult to master given her position.

‘In the window seat?’ Albert intoned, without a drop of humour.

She scrambled to a seated position and then stood to greet her brother-in-law with a kiss to each cheek.

‘It’s a lovely spot for thinking.’

He eyed her dourly. ‘You’ve been avoiding me.’

Theodosia twisted the thick square ring on her middle finger. There was little point in denying it. Just this last week alone she had hidden in an armoire and the sink alcove in the scullery to avoid him. ‘Shall I call for tea?’

The rattle of crockery on a tray sounded from the doorway, and Rodgers gave a polite cough. ‘His lordship requested tea.’

Theodosia met Albert’s stern gaze with a bright smile. ‘Tea it is.’

Theodosia eyed the tray with two cups on their matching saucers. ‘Is Camelia not joining us today?’

‘That is why I wish to speak to you. Camelia is’—Albert paused meaningfully—‘feeling under the weather.’

In other words—pregnant. Suddenly the air in the room was thick and overheated, and Theodosia sat in the nearest chair with a thud. This was the news she had been dreading since Albert had recently married the alarmingly strong-willed Camelia. So openly invested in Albert laying claim to the family title and the large Mayfair townhouse that went with it was his bride, Theodosia half expected Camelia to enter the room with her luggage, ready to move in immediately.

‘Oh.’ Theodosia tapped her fingers on her knees.

Albert seated himself in the chair across from her and gestured with a flick of his wrist for Rodgers to pour the tea. The stream of amber liquid poured steadily, and Theodosia breathed in the reassuring scent of Darjeeling. Good old Rodgers never missed a trick. Perhaps he had suspected the reason for Albert’s increased visits to the house. Much as Theodosia had, if she were perfectly honest.

‘Please give her our warmest regards.’

Albert levelled a look at Theodosia across the rim of his cup and gave a small sigh. She moved over to her desk to retrieve her glasses, avoiding his gaze. She couldn’t bear to meet what she knew would be a kind and understanding look.

‘I have sent staff to the dowager’s cottage in Carlisle in preparation for you.’

With her back to him, Theodosia bared her teeth at the wall. The dowager’s cottage in Carlisle? Over her dead body!

She had worked tirelessly these last two years to build her reputation as the lady detective to the ton. Not to mention how the staff here needed her. That servants who found themselves without a position due to pregnancy could find a position with Lady Fortescue-Brown was well known amongst the lower levels of the grand houses in London.

‘You have a month to make your arrangements here.’

Theodosia sat back in her chair, nodding energetically at his words.

Albert’s gaze dropped from her face to the signet ring on her middle finger. His Adam’s apple bobbed as he swallowed. Theodosia jammed the glasses on to the end of her nose, grateful they blurred the room around her.

A light rap at the door interrupted Albert’s words.

‘The Duchess of Eltham has arrived, my lady.’

A wave of relief rushed through Theodosia, bringing her to her feet. She was unable to hide the smile that burst from her lips.

‘Must go, I’m afraid. One does not keep a duchess waiting.’

Albert stood but made no move towards the door.

‘You have until the end of the month, Theodosia,’ Albert said.

Theodosia blinked at him through the glasses, unable to see anything but a blur of colour and light. ‘Thank you for being so patient. I appreciate it.’ And she did. Truly. There were few ‘spares’ who would wait two years to claim their inheritance, but Albert had gracefully allowed Theodosia to remain living in the encumbered townhouse that had technically been his since her husband had disappeared.

There was silence, and Theodosia peered over the edge of the spectacles. Albert was staring at her, his brow furrowed.

‘You understand what this means, don’t you, Theodosia?’

She stood on her toes to kiss his smooth cheek goodbye and removed the glasses as she forced herself to walk gracefully from the room. All the while her mind screamed: Run!

She understood exactly what this meant. There was exactly one month for her to come up with a plan that would enable her to stay in London. As far as she was concerned, if Albert wanted her in Carlisle, he was going to have to drag her there, kicking and screaming.

Still pining after Netflix’s Regency romance TV show Bridgerton? Don’t worry, so are we! In between dreaming of ravishing rakes,…Read more

They will dedicate their lives to their country, but no one will ever know… A compelling story about tenacity and…Read more