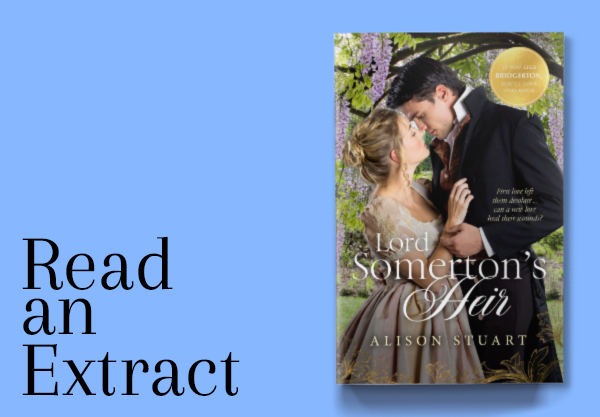 Isabel, Lady Somerton, is desperate to bury the memory of her unhappy marriage by founding the charity school she has always dreamed of. Her hopes are shattered from beyond the grave when she is left not only penniless but once more bound to the whims of a Somerton … although perhaps the new Lord Somerton is a man she can trust … or even care for?

Suspicion could tear them apart … honesty and courage may pull them together.

‘In the wake of Waterloo, a richly detailed historical romance with plenty of danger, deception and derring-do.’ – Anne Gracie, international award-winning author

In the light of lanterns held up by the stablehands, the glossy hide of the great black horse reflected fire. The animal shivered, breaking the fire into golden sparks. The handsome head bobbed, testing the hold of Thompson, the head groom, while the huge eyes, white against dark-fringed lashes, scanned the crowd of faces.
Isabel, Lady Somerton, clutching her shawl around her shoulders against the cold, dark winter morning, stopped short of the horse, her hand going to her mouth.
No saddle—no rider.
‘What’s happened?’ The words were forced through lips that refused to move.
‘His lordship went out on Pharaoh last evening, my lady.’ The head groom, Thompson, swallowed. ‘We found the ’orse in the stable yard this morning. We’ve no idea how long it’s been here.’

Pharaoh pulled at the restraining reins, rearing up, his great ironclad hooves raising sparks as they returned to the cobbles.
‘Get the horse inside the stable and see to him,’ Isabel ordered. ‘We must order a search party. My husband is lying out there, injured.’
And in this cold.
She shuddered, dismissing the thought that they may be too late.

Thompson thrust the reins at his son. ‘See to the ’orse, boy.’

Peter Thompson seemed dwarfed against the enormous animal but Pharaoh went meekly at his touch, head lowered as if exhaustion had claimed him and he wanted nothing more than a warm stall and a basket of oats.
Thompson looked at Lady Somerton. ‘Do you know where he was bound, my lady?’
Isabel swallowed. ‘Lady Kendall,’ she said. ‘He was intend-ing to visit Lady Kendall.’
Thompson nodded. ‘Aye. We’ll take that route first. To me, all of you.’
Thompson gathered his hands around Pharaoh. The staff, still rubbing the sleep from their eyes, were fetched from the house and the men of Brantstone Hall set out on foot to search for the missing Lord Somerton, leaving Isabel standing alone in the stable yard in the cold, grey light of dawn. She would have stood there all morning if Mrs Fletcher, the housekeeper, had not fetched her inside, sitting her down in the blue parlour with a tray of tea and buttered bread.
Isabel sat unmoving, staring out at the winter landscape of the Brantstone Park as if she expected Anthony to come galloping down the carriageway. The tea, in its delicate porcelain cup, sat undrunk and cold and the bread curled and dried as the little clock on the mantelpiece ticked away the minutes.
She knew even before Thompson knocked on the door and stood shifting from one foot to the other, his shapeless felt hat clutched in his hand, that Anthony was dead.
She followed the head groom back out into the stable yard. She looked at the farmer’s manure cart that had been dragged into the yard and with her head held high, she walked across to it. Thompson interposed himself between her and the inanimate object that lay in the filthy dray.
‘Are you sure, my lady?’ he asked.
She nodded and Thompson flicked back the sacking that covered the shapeless lump in the back of the cart. Anthony lay stiff with rigor mortis in the slimy filth and Isabel stared down into her husband’s face, into his open, staring eyes, already opaque in death. An ignominious end to his life, she thought.
‘We found him over by Lovett’s Bridge. He’d taken the hedge intending the shortcut across the Home Farm fields,’ Thompson was saying. He jerked his head at the saddle, the beautiful, hand-tooled saddle that had been tossed into the cart with its owner. ‘Looks like the girth strap broke and he came off. Broke his neck in the fall. He’d not have known anything about it, m’lady.’
Her gaze rested on the saddle. It had been her gift to Anthony on his birthday only a few months earlier. Now it was the cause of his death. It stood as a symbol of everything that had gone wrong between herself and her husband.

Aware of the anxious faces that surrounded her, Isabel swallowed. They expected her to break down. They wanted her tears but she had none to give. She had expended too many tears over Anthony, Lord Somerton, while he lived to spare any for him now that he was dead.
She turned on her heel and walked back to the house with her head held high. With every step, the enormity of Anthony’s death sank in.

She was free, but at what price came that freedom?
Her back straightened and her lips tightened.
To attain freedom, first she had to find Lord Somerton’s heir

‘Are you certain he’s here?’ Isabel—Lady Somerton—asked, her voice muffled by the lavender-scented kerchief she had pressed to her nose and mouth.
The pathetic piece of muslin did little to conceal the stench of unwashed bodies, blood, corrupted wounds and worse that pervaded the makeshift hospital. The price Wellington had paid for the victory lay crowded on filthy straw mattresses on the makeshift hospital floor of an old warehouse in Battersea.
The wounded of Waterloo had been crowded together, so many of them that only a curtain separated the officers from the other ranks. Most still wore the tattered remnants of the uniform they had worn in battle over ten days ago and it looked to Isabel as if the rough bandages over their wounds had not been changed in days.
A young boy, hardly older than Peter Thompson, the stableboy at Brantstone, screamed for his mother. Her heart stopped at the heart-rending sound and she turned and knelt down beside him, smoothing the hair back from his burning forehead. The child had probably been a drummer boy, caught in the horror of the battle.
He clutched her hand, looking at her with unseeing eyes and she murmured to him the sort of platitudes she imagined a mother would use with an ailing child. His breathing steadied and then stilled; the hand clutching hers fell away.
Her companion, Bragge, the Somerton man of business, touched her shoulder.

‘Come away, my lady.’
She stared down at the child on the cot. ‘But …’
‘He’s dead, my lady.’
Bile rose in her throat and she swallowed it down. She could not show weakness, not now. She needed all her strength.
She rose slowly to her feet and cast the dead boy one last look, her lips moving in silent prayer for his soul and the mother who would grieve for her son.
Beyond the curtain, the conditions for the officers were little better. At least they had cots, not straw-filled bags, but those who had survived the rapid evacuation to England were in a poor state.
‘The orderly over there said he’s in that corner, m’lady.’ Bragge’s voice carried no conviction and he looked as green and sickly as she felt.
He held the lantern higher to illuminate the man they had sought for so many months. He lay on his left side with his back to them. A torn and stained scarlet jacket with yellow facings and a captain’s epaulets had been thrown across his shoulders and a ragged blanket covered his torso and legs. All Isabel could see of the man was dark matted hair.
Isabel held back for a moment, wondering what she would say. She had rehearsed a pretty little speech in the coach but now as she looked down at the man, known to the world as Captain Sebastian Alder, the words deserted her. How would he take the news? It could not be every day that the humble son of a country parson found himself elevated to the peer-age. Would he rejoice or rail against his mother, who had kept the secret of his parentage from him?
Doubt seized her. What manner of man would he turn out to be? Surely a parson’s son would have some education, but would he be capable of running the Somerton estates? For the first time since hearing the news that they had found the heir to the Somerton estates, a niggling doubt caught her.
‘M’lady?’ Bragge’s voice broke through her musing and she took a deep breath.
Steeling her nerves, she reached out a gloved hand, touching the man on the shoulder.
‘Captain Alder?’ Her uncertainty caught in the rising tone. When he did not stir, she looked up at Bragge, her heart sinking.

‘Are we too late?’ she ventured.
‘Try again, my lady.’
She bent down and closed her fingers on his shoulder, shaking him.
With a speed that took her completely by surprise, a hand grasped her wrist as the man rolled onto his back, hot, angry, feverish eyes seeking out the person who had disturbed him.

‘Who the hell are you?’ he demanded.

There are SO many adaptations of Jane Austen’s classic novels. From 1990’s BBC mini-series to 2022 Netflix movies, Regency set…Read more