There’s a murderer on campus. Read a Sneak Peek from Mark Of Guilt by Diane Hester 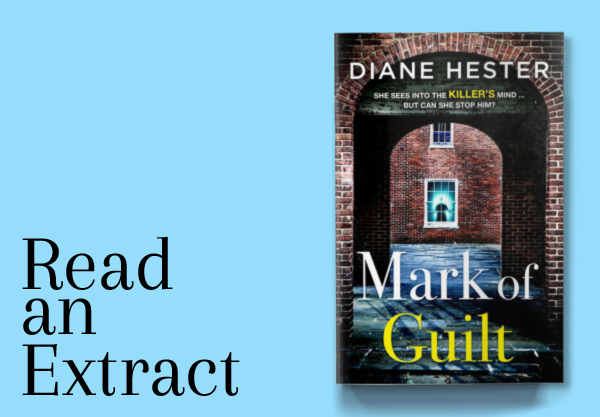 ‘Compelling, thrilling, and well-paced. Mark of Guilt is fantastic’ My Written Romance

‘Mark of Guilt by Diane Hester is a suspenseful story that you can’t stop reading!’ Goodreads review

‘All the elements that I love are in this book. Suspense, romance and paranormal abilities. Put together in a well-written book with interesting characters’ Goodreads review

‘The chancellor’s office is up that way.’ Sam pointed to a corridor leading off the back of the student lounge. ‘Her appointment was for nine o’clock, so she should be coming out any minute.’

Mac unbuttoned his leather jacket and thrust his hands back into its pockets. Even deserted, the lounge had an air of vitality about it, an aura left behind by its recent occupants.

He stood a moment drinking it in, a welcome change from the desperate feel of the hospital room he’d only just left. People intensely alive had been here—discussing, arguing, laughing, confiding, their minds filled with questions, hopes and dreams. Minds not much younger than his but in some ways certainly more agile.

Even in this day of tablets and smart phones it appeared at least some of them still read the papers. Reluctantly he scanned the copy lying open on the nearest coffee table, its headline screaming a needless reminder that one of those young and vital minds had recently vanished without a trace. So far Mac had unearthed not a single clue as to the girl’s whereabouts. A fact that preyed as heavily on his mind as what he’d left behind in the hospital.

He turned back to Sam. ‘Okay, I’ll take Cavenaugh. You go see what you can find out about her from administration.’

‘Anything in particular you’re after?’

‘Whatever you can get. What kind of student is she, what kind of person. If she did see something, I want to know how reliable a witness she is. We may finally have copped a break with this, Sam. I don’t want to get my hopes up for nothing.’

Lindsay and Shaunwyn stepped from Chancellor Wallace’s office into the hall of the admin building.

‘There, you see, I told you she’d listen.’ Shaunwyn beamed a self-satisfied grin. ‘Don’t muck around with the little people, that’s what I always say. If you want results, go straight to the top.’

‘I have to admit I’m surprised,’ Lindsay said. ‘I never dreamed she’d go over Collier’s head, even with him being the weasel he is. I wonder if other students have complained about him.’

‘I wouldn’t doubt it. The man has serious self-control issues. They should do us all a favour and have him desexed.’

They came to the lounge—couches and chairs arranged in clusters on either side of the central aisle. At that hour of the morning it was nearly empty. Just two men standing in whispered conference near the opposite door.

‘You must be feeling better at least,’ Shaunwyn said. ‘With that good night’s sleep and the chancellor’s backing, you’d be ready to take on a dozen Colliers.’

A good night’s sleep? Yes, it had been that. At least she couldn’t recall any nightmares. Her spirits lifted as they strode towards the exit. Perhaps it had just been a one-off thing—the dreams and what had happened in the library. The hound would now return to its slumber and leave her alone for another ten years. Hopefully forever.

The thought made her smile. ‘Yes, I’m relieved. At least now I’ll flunk out on my own initiative and not just because I missed an exam.’

Lindsay stopped and turned towards the sound of the masculine voice.

She saw the scar first. Hardly disfiguring—a cat’s whisker slanting out from his lip. His face was long and sorrowful looking, his hair ruddy brown, eyes the bluest she’d ever seen.

‘Detective Garren Macklyn.’ He showed his ID. ‘I’d like to ask you a few questions about Martha Daniels.’

The floor fell away beneath her feet.

Lindsay stared at the man before her. How could the police …? How could anyone have known to connect her …?

She drew herself up. ‘The missing girl? I’m sure there’s nothing I can tell you; I don’t even know Martha Daniels.’

He gestured to the nearest cluster of chairs. ‘If you would.’

With no way out, she turned to Shaunwyn. ‘You go ahead, I’ll catch up.’

‘You sure? I can stick around if you want.’ She shot the stranger an assessing look.

With a deep breath, Lindsay walked to a chair and sat down. She prayed her step hadn’t faltered visibly. ‘I really can’t see why you want to talk to me. Like I said, I’ve never even met the girl.’

The man took a seat on the adjacent couch. Watching him pull out a notepad and pen, she realised it was partly his attire that had so surprised her—jeans, a black T-shirt and a worn leather jacket. The detectives she’d known had dressed a bit more formally than this.

But that had been eleven years ago. A different lifetime, a different world.

‘You might not have met her but you’d know her by sight,’ he said. ‘You’d recognise her if you saw her somewhere.’ Not asking, he was telling her this. His face impassive, betraying not the slightest hint of emotion.

‘Well, of course I would now. But only because of all the posters that have been put up around campus. I wouldn’t have known her before she went missing.’

‘You’d know if you’d seen her within the last week then.’

‘You mean since she disappeared? Well yes, certainly, I’m sure I would have. If I’d seen her.’

The slightest flicker in the deadpan veneer. ‘You’re saying you haven’t?’

‘Of course I’m sure. I know the police are looking for her. If I’d seen her I would have reported it.’

Macklyn leaned back, taking a moment to study her closely. ‘Well, now that is a bit of a mystery, Miss Cavenaugh. You see I had two students tell me you were talking about Martha Daniels only yesterday.’

Lindsay shifted. ‘That’s entirely possible. After all, the girl’s missing. Everyone on campus is talking about her.’

‘True, but these witnesses claim you had specific information about her.’

He flipped a few pages in his note pad. ‘The last confirmed sighting of Martha Daniels was in the uni library on the night of Wednesday June eleventh. But according to information I was given yesterday you may have seen her after that.’

Lindsay shook her head. ‘I’m sorry, I don’t know what you were told, but I have never seen Martha Daniels in person. Not on that night or any other.’

He tapped the pad with the butt of his pencil. ‘Were you in the library last Wednesday night?’

‘Were you outside the building in a position where you could have seen Martha leave?’

‘As a matter of fact I was home studying at the time. My flatmate can confirm it if you don’t believe me.’

‘Any reason I shouldn’t?’

His casual tone didn’t deceive her. The intensity of his gaze was the giveaway—the look of the predator that had just spotted the weakest member of the herd. ‘None whatsoever.’

‘I’m still a bit confused,’ he said. ‘If you weren’t in the library, why did you claim to have seen the girl there?”

‘I have two witnesses that state you did. According to them, you said you saw Martha leave the library at closing time, get in a car with someone and drive away.’

Lindsay swallowed. ‘Okay look, I think I know what’s happened here. I might have said those things that were reported to you but I was talking about a different person. Your witnesses just misunderstood what they heard.’

His gaze never left her as he considered this. ‘Possible I guess. But if you weren’t there, how could you have seen anyone leave the library?’

‘I … I was talking about a different night as well.’

She clenched her fists inside her sweater sleeves. No, he didn’t see. A man like this would never see. Like every other of his kind, he’d never believe a word of the truth. ‘Is that all, detective?’

‘Just one last thing.’ He reached into his pocket again. ‘The two students who overheard your comments yesterday claim you were holding this at the time.’ He held up a small clear plastic bag. Inside was a tear-shaped amethyst earring.

Lindsay fought to retain her facade. The sight of the object that had triggered her first episode in years did nothing to settle her nerves.

‘It belongs to Martha Daniels,’ he said. ‘Her roommate identified it for us this morning. You recognise it?’

She drew away sharply as he held it towards her. The last thing she wanted was to touch it again.

The man’s gaze sharpened. ‘Something wrong?’

‘Yes, I recognise it. I found it on the floor of the library yesterday.’

‘You never saw it before that?’

‘And you didn’t know it belonged to Martha?’

‘I had no idea who it belonged to.’

‘So why’d you leave it there?’

‘What?’ His questions were coming like bullets now, flying at her with no breath between.

‘The uni has a lost property, doesn’t it?’

‘A person finds something that’s obviously been lost, they usually turn it in.’

Lindsay stilled. His technique was suddenly very familiar—ask your questions so fast and furious they don’t have time to think up any lies.

Anger steeled her flagging control. She answered calmly. ‘I meant to turn it in. I must have forgotten.’

The man stared back at her.

‘Look detective, in case no-one’s told you, this is exam week. If I don’t get to my class on time I’ll be locked out, miss the exam and fail my course.’

She held his gaze, relishing every second she could find the courage.

At last, with the barest hint of a smile, he slipped the earring back in his pocket. ‘Well, we wouldn’t want that to happen.’