‘Not your usual rom-com’ we review Last Christmas 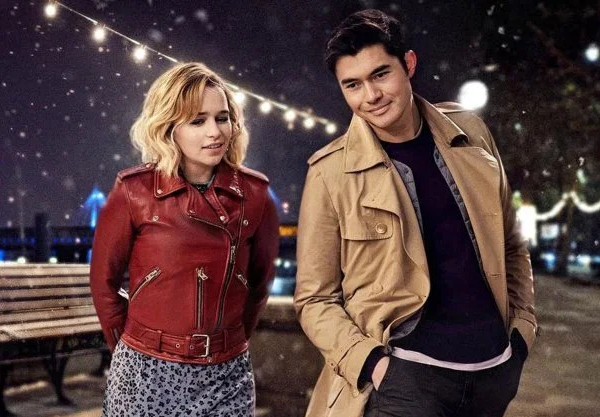 As the author of a Christmass-y romantic story herself, we asked author Alyssa J. Montgomery to watch and review Last Christmas starring Emilia Clarke, Henry Golding and Emma Thompson!

The department stores have their Christmas decorations up and it’s starting to feel like the season to be jolly. I’m barely restraining myself from putting up the Christmas tree and breaking out the boughs of holly but I have started compiling my list of presents to buy for family and friends. With my Christmas contemporary romance novel The Magic of Christmas being released this week, I decided to get into the swing of the holiday season and take my elder daughter off to enjoy the movie Last Christmas. A huge fan of romantic comedies, I’d been looking forward to it since I was asked to write this review.

The screenplay was written by Emma Thompson, Greg Wise and Bryony Kimmings, directed by Paul Feig and has a wonderful cast led by Emilia Clarke (Kate), Henry Golding (Tom) and one of my all-time favourite actresses, Emma Thompson (Adelia). I’d heard that the story was inspired by the music of George Michael and it turned out to be an unusual premise which took me by surprise. I also enjoyed the nostalgia of hearing George Michael tracks throughout the movie.

Now, before I go any further, I fully admit that I am no movie critic but as an author I find I can never quite switch the internal critic off whether I’m watching a movie or reading a book. I know it can be quite demoralising to cop bad reviews (which this movie has received in spades from the likes of Rolling Stone, New York Post, US Weekly, Entertainment Weekly and the BBC) and so if something doesn’t gel with me I try really hard to pinpoint why. I think the movie fell short of my expectations of a romantic comedy because it didn’t have a believable HEA ending for the couple; however, there were other aspects of the movie that I enjoyed.

This time of the year we should all be in a very generous Christmas frame of mind so I’m going to try to dwell on the positives. Emilia Clarke makes a very cute elf and can hold a tune quite well. Henry Golding brought quite a bit of energy to the screen and I thought Emma Thompson did a really great job of Adelia’s accent. It was lovely to see these actors on the big screen together and I also liked the soundtrack (especially the inclusion of the track ‘This Is How (We Want You to Get High)’ which I believe hasn’t previously been played publicly.)

From a Yugoslavian migrant family, Katarina (who insists on being called Kate) is living a highly disorganised and fairly selfish lifestyle following a serious illness (which we don’t get a handle on until we absolutely need to). She ditches the ‘tension’ in her family home to couch surf at the homes of various friends but ends up being kicked out by all of them as she is a walking disaster. Meanwhile, she works in London as a sales assistant dressed in an elf suit for ‘Santa’ (Michelle Yeoh) at an open-all-year-round Christmas shop. Kate is cynical and sarcastic, mocking her customers and her boss, and ignoring her mother’s phone calls rather than putting her parents’ minds at rest about her well-being. It was kind of difficult for me to feel any great empathy for her initially but at this point I’m sitting in the cinema thinking that I’ve ‘Gotta Have Faith’ that the character will grow on me.

Enter Tom, a very wholesome character who might be related to Fred Astaire as he is always dancing in the street. Kate first spots him through the shop window as he’s standing on the street looking totally lost. After a brief exchange, and Kate getting a liberal dose of pigeon dropping in her eye when he tells her to ‘look up’, Tom follows Kate into the shop and asks her to go for a walk with him. He’s rebuffed but he’s not put off because when they meet again coincidentally, he persists in a happy, positive way that’s the polar opposite of her negativity.

Boiled down to the very basics, this movie is about Kate’s development from a selfish young woman who mopes around London in her jingling, curled up elf shoes into a woman who finds it in her heart to put her illness and medical woes behind her. Ultimately she not only considers others who are less fortunate but also mends bridges with all those she’s offended. Tom is absolutely the catalyst for this change—a person who listens to her, challenges her and makes her assess her behaviour. It’s the character development in the movie that I enjoyed most as I was ultimately able to be empathetic to Kate.

Hm. There were some tender moments between Tom and Kate, but I’m not convinced she knew enough about him to fall in love with him, and she couldn’t have been very attracted to him initially as the first night after she spent time with him she went out boozing and had a one-night stand seemingly with some random she picked up at the pub. Kate did, however, become rather dependent upon Tom. As for Tom’s feelings for Kate? Well, he needed some persuasion to kiss her so I’ll let you decide on what they might have been. For me their interactions lacked sizzle and I thought they were better suited being friends rather than lovers.

Hm. I laughed out loud at the homeless woman’s audition piece for the Christmas charity concert, and Adelia’s inappropriate labelling of the ‘dessert’. I also had a small chuckle at her incomprehension about ‘dick’ simply because she carried her confusion really well. A friend of mine found it really funny that Kate didn’t realise her boss wasn’t really named ‘Santa’ but this comedy fell flat for me. The scene between ‘Santa’ and the man who entered her store also struck me as uncomfortably weird and unbelievable rather than funny.

Okay, I didn’t see it coming. Word on the internet is that everyone else did, so perhaps I’m a dummy, but the closest I got was thinking that Tom might confess to Kate that he was seriously ill.

I cried. The movie might not have been the romantic comedy I was expecting, but it certainly moved me to tears and engaged me emotionally. Several tissues later, I emerged from the morning matinee hoping I wouldn’t see anyone I knew!

Not the HEA romantic ending I expected, but there were elements of warm fuzzy feelings that you’d expect from a heart-warming Christmas movie. It was great to see that Kate had bonded over vodka shots with her mum, reached out to her sister and friends, been instrumental in helping her boss foster a love interest and generally developed into a generous and likeable person. Everyone got into the swing of Christmas at the Christmas concert, and Kate’s family were able to enjoy a Christmas meal together.

When was the point at which Kate realised she loved Tom? Why didn’t we see a huge enough reaction from Kate to the twist?

Best things about seeing this movie…

This is a warm Christmas story that delivers the lovely message that it is wonderful to be alive and that many bridges can be mended with a little care and effort.

Perhaps the most uplifting thing about this movie for some will be knowing that when it comes to family tensions and drama running high on Christmas day, their families are probably not as dysfunctional and weird as Kate’s!

Go to this movie without the expectation of it being your usual rom-com. Instead expect a warm story about a young woman who is almost at rock bottom getting her life back on track. With that mindset, you may enjoy it.

While there isn’t the guaranteed romantic HEA ending, you can be sure you’ll feel good about Kate’s character development and confident that it will be a happy Christmas for those in the movie. You may leave the movie theatre with tear-streaked cheeks but in your mind you’ll be singing the lyrics to George Michael’s ‘Last Christmas’!

Alyssa lives on acreage south of Sydney with her husband, three children and a menagerie of animals. She has her own busy Speech Pathology practice and has also been a professional pianist and an international flight attendant. Apart from writing, she loves to travel overseas with her family, play tennis and entertain friends at dinner parties.

Bronwyn Sell’s latest book Lovestruck is set on a gorgeously romantic Whitsundays island. To celebrate its release we got Bronwyn to tell…Read more

An enemies-to-lovers story about second chances and risking it all for love. Of all the people to be here, why…Read more