One dressmaker. One billionaire. Two broken hearts. How long could it last? Read a Sneak Peek from Save The Date by R.J Groves 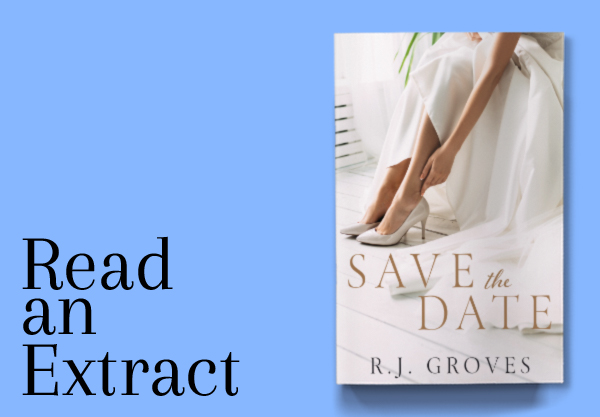 One dressmaker. One billionaire. Two broken hearts. How long could it last?

Darlington Vineyard is the perfect wedding venue, and Andie Gray has always made sure she had a date booked, with or without a fiance. Her dreams come true when she lands the perfect man to go with the perfect venue, but then she discovers he’s not who she thought he was. All of a sudden love and fairy tales no longer make sense, leaving her questioning everything about her life…

Taylor Ballin knows what he wants, and love isn’t it. He’s been burned before, and it won’t happen again. How was he to know that offering to pay for his sister’s wedding would bring bridal seamstress Andie Gray, with her maddening allure, into his world and tear down the walls he’d built around his heart?

She’s the kind of woman he’s spent ten years avoiding, and he’s everything her ex is. But the pull between them is unavoidable and neither of them can fight it. Perhaps a no-strings-attached kind of deal is exactly what they both need.

Or is it the one thing they should avoid?

Andie couldn’t tear her eyes away from the mirror.
She looked—felt—pretty. Prettier than she ever had before. Her breath caught in her throat. It felt like a chokehold. She wasn’t used to these mixed feelings. She wasn’t used to feeling beautiful and shattered at the same time.
Ever since she was a child, she’d dreamed about her perfect wedding at that beautiful vineyard in Darlington, with fairy lights and paper lanterns as far as the eye could see. Surrounded by flowers and loved ones. A wedding that looked as though it had just been pulled from a Disney movie. She’d always wanted it, dreamed of it. It would be perfect. Magical. She’d believed in fairy tales, and that was going to be hers.
Not anymore.
She struggled to believe in anything now.
‘You ‘kay, babe?’ Harley said, plucking another pin from her mouth and sticking it in the side of the wedding dress.
Andie blinked at the mirror, forcing herself to breathe again, her eyes drifting down at the magnificent wedding dress she was wearing. It shouldn’t affect her like this. It was just a dress, after all.
‘Tell me again why I have to wear this thing?’ she said, her voice shaky. She forced herself to take another deep breath before she worked herself into a panic attack.
Harley pulled the remaining pin from her mouth and stuck it in near Andie’s hip. Andie cringed as the pin pierced her skin. She hoped she wouldn’t bleed on the dress. For Harley’s sake.
‘Your measurements are closer to the model’s than mine,’ Harley said, frowning at the last pin she’d just stuck in. She tugged on the fabric and Andie felt like her insides were being squeezed up to her throat. ‘I need to pull it in a couple more inches. I swear that girl has no hips.’ Harley leaned to the side to write her notes in her book.
Andie turned a little and eyed her reflection. As beautiful as this dress was, the mermaid cut just didn’t feel flattering on her. No doubt that model thrived in dresses like this. While the model was only slightly curvy and mostly skin and bones, Andie was a tad more generous in the hips and chest, her waist a little thicker.
‘What’s wrong with the mannequin?’ Andie said, glancing up at the time. She had a ten o’clock who should be arriving any moment, and she did not intend on meeting them in a wedding dress.
‘You can only do so much on a mannequin,’ Harley said, rising to her feet and gathering up her work. ‘And since this monster refuses to come to the fittings and insists on complaining the fit is wrong at the photo shoot, I need to make do with what I’ve got.’ She stilled, studying Andie. ‘It’s never bothered you before.’
Andie swallowed. She’d tried not to let what happened affect her work. She knew it would be hard to continue working in a bridal shop after her engagement fell through. But she had to try her best. Had to keep herself distracted.
‘That was before …’ she muttered, feeling herself taking short, quick breaths. God, it was hard to breathe in this thing.
‘Of course,’ Harley said, her expression apologetic. ‘I’m sorry, I didn’t think. It’s still recent.’
Indeed, it was. Six weeks had done nothing to ease the pain. She heard the phone ring from the front room, and Harley grimaced at her, her arms full of fabric scraps and notes.
‘Do you mind getting that?’ she said. ‘I need to deal with all this before I forget what needs to be done.’
Andie’s eyebrow lifted and she glanced down at the dress she was wearing. ‘In this?’ Harley grimaced again. ‘I know. I’ll only be a minute. Then I’ll help you get out of that thing.’
‘Fine,’ Andie muttered, shuffling towards the front room.
Shuffling, because that’s all she could do in this damn thing. It hugged her body so tightly she worried that bigger steps would either kill her or make her burst out of the dress. And Harley had put too much work into it to damage it now. She reached the phone just in time and booked in yet another anxious bride for an appointment. She wondered why so many brides were anxious when planning the biggest day of their lives. She hadn’t been anxious about her wedding at all.
Perhaps she should have been.
Writing a note next to the appointment in the book, she hung up the phone and heard the jingle as the front door opened.
Great.
Her ten o’clock was here and she was still in this damned dress.
‘I won’t be a moment.’ She finished writing the note and glanced up.
She froze.
Had she stopped breathing again?
It was magnificent.
He was magnificent.
Broad, strong shoulders filled his suit well. She’d warrant the rest of his torso was just as solid beneath his shirt. Shoulders like that almost guaranteed it. His suit was tailored to fit and boy, did it fit him well. His strong thighs seemed to hold promises. Was that possible? And his shoes were neat, polished, squared at the toes. She lifted her gaze and felt her heart pound against her chest.
He was taller than her. If she had her highest heels on, she would only reach his shoulders. God, even his neck looked strong. He had dark brown hair that was slightly too long but neatly trimmed, a perfectly square jaw sporting trimmed stubble, and his eyes—she couldn’t quite discern them. His gaze made her feel both intimidated and as though she was a specimen.
This was not her ten o’clock.
Her ten o’clock went by the name of Libby Ballin. And he was no Libby Ballin.

A hot vet. A rebellious teenager. And meddling but well-meaning townsfolk. Vera gets more than she bargains for when she…Read more

In its 8th season on Australian TV, it’s safe to say that Married at First Sight consistently delivers the drama….Read more