Pods, Passion, And Proposals. OH MY! A Quick Recap of Love Is Blind. 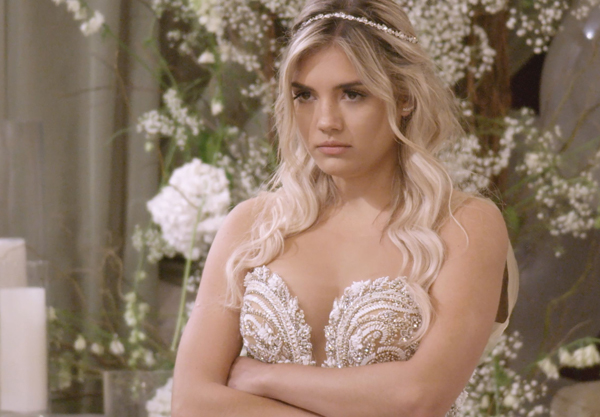 Way back in February 2020 before the world went crazy and toilet paper became a new currency, a gem of a show premiered on Netflix, and as I don’t mind the odd reality TV show now and then (yes, I’m one of those people) I couldn’t resist the binge. It was about romance and finding the love of your life, which in Mills & Boon-landia is all day, every day.

But there was a catch. THEY COULDN’T SEE ONE ANOTHER!

Yes, before quarantining became the ‘in thing’ this show was doing it already, to see if two people could form a relationship based on an emotional connection rather than physical attraction, thus showing us that LOVE IS BLIND (yes, the show is called that because Love, Are You Out There? isn’t as catchy).

The second season of this iconic show drops on Netflix next month, so here’s the recap on everything that went down in season 1.

Of course, I must share with you what went down. Not all of it, sure, but enough to forewarn you there are indeed spoilers ahead!

For ten days 30 desperadoes’ singles go on speed dates in individual rooms they call ‘pods’. Each guy and girl can TALK to one another but can’t SEE one another. And, in the end, if all goes well, of course, there will be a proposal! (cue gasps).

After matching up the couples are put to the test IRL with a ‘honeymoon’, moving in together, and ‘getting married’. They also get to have parties with the other couples, for DRAMA. Think Married At First Sight meets The Bachelor meets 30 Day Fiance.

I’m not going to list all 30 of them because ain’t nobody got time for that, so I’ll just go with the favourites.

The girls > Amber, Jessica, Lauren, Giannina, Kelly and Diamond (I kid you not).
The guys > Damian, Cameron, Kenny, Carlton, Mark, and Barnett (no Slate or Flint? Missed opportunity, guys!)

The guys and girls are standing out the front of these doors, which lead to each pod. Okay, sidebar, I need to address the pod issue because while I understand the whole ‘like two peas in a pod’ premise, can’t we just call them rooms? No? Okay then, I’ll move on. Inside the rooms pods, the singles start chatting to each other, playing the getting-to-know-you game fast. REAL FAST. They start connecting, and sharing, and showing us exactly why they are on this show and never found ‘the one’ in the real world.

He admits he’s a mama’s boy (abort mission, abort mission!) – she says she’s athletic, and the camera shows a shot of her body just in case we don’t get it. Mark is 24, Jessica is 34, and she’s never dated anyone younger than her. EVER. But that’s all forgotten when they realise they’re from the same state and love the Chicago Bears. Um, no you cannot base a relationship on the fact you like the same football team!

This time last year we were all watching Love Is Blind and wondering how Jessica was gonna make it work with Mark being 24.

From the get-go, I like these two. They’re talking about where they’re from, their jobs, what they like to cook, and what they’ll name their babies. Okay, I added that last bit, but come on, they are cuteness overload!

She admits she’s a tomboy and off-the-wall crazy. (I’m thinking bunny boiler). He admits he’s a joker and hope that he doesn’t come off as creepy. (He does). But later when he’s dating another girl, he says he allows his dog to sleep on his bed, and that wins me over. Completely. Good boy, Barnett, good boy!

They’re having lots of fun and hit it off. He jokes about their honeymoon, and she plays along. As the show progresses, they continue dating and open up to one another. But Carlton has a secret, and he doesn’t share it with Diamond.

These two imploded before their honeymoon had even ended. Iconic.

We meet them when they’re on their 5th date. They’re both sitting on the floor and talking about family and emotional connections. It’s nice but ho-hum, and I reach for the remote to fast forward.

Kelly claims the dating scene has never been right for her (does she know she signed up for a dating show?) Kenny ’s had great relationships in the past, but there’s always been something missing (clearly because you’re on a dating show and not already married). They start with the hard-hitting questions straight away. “What’s your favourite book?” As I work in publishing, I approve. But to my surprise, they like the same book! A children’s book. And by the end of that date, they’re almost in tears. So am I, because my head is hurting just watching them.

Yeah… they didn’t make it.

She’s just a ring-in to throw us off. Move along, people. Nothing to see here!

My one WTF moment

Well, there was a lot more than one – notable mentions to the guy who responded, “In shape and beautiful,” when asked what he was looking for in a woman. And this whole conversation from another couple, Girl: “Have you ever had a dog?” Guy: “No, does that rule me out?” Girl: “No, as long as you would never, like, yell at a dog.” Guy: “Who does that?” Girl: “Um…people.”
But my number one WTF is this from one oddball girl… “I hate…I hate…I hate being able to hear people breathe.”

Will you marry me?

Yes, you read that right. We get a proposal in the VERY FIRST EPISODE! After the couple has been ‘dating’ for FIVE DAYS! It’s Lauren and Cameron – cuteness overload couple – but before the proposal, there’s a declaration of love, and Cameron is more than – um how shall I say this – affected, yes, he’s affected. Because one moment he’s all deep and emotional, and the next there’s a strategically placed cushion. I hope they got that dry cleaned before the next couple came into the room!

So, after a couple proposes, they finally get to meet one another, and it’s all dramatic as they stand behind these big glass doors. The background music is serious. Their faces are serious. And there’s one seriously long red carpet separating them. That’s right before you get to greet your future spouse, you must run a mile! Okay, it’s not that long, but it makes for excellent viewing as they rush to one another and embrace. I would like to see the outtakes though because I reckon when those doors opened, and someone saw that distance, they balked!

When the dates are officially over, and we have the ones who made the cut, they go out into the real world – well, semi-real world because they lump the engaged couples into the same apartment block – and it’s time to meet the families. There’s disapproval all over the place, and I’m giddy with excitement as the drama unfolds.

Giannina and Damian (after much tension and fighting) were not be. In fact Damian left Giannina at the altar. SCANDAL. They actually dated again after the show (plot twist), but had split up again by the time of the second reunion special.

Yes there are TWO reunion specials.

Jessica and Mark fared even less well, with Jessica’s fears about their age gap leading to her abandonment of Mark at the altar. Kelly and Kenny too broke up on their wedding day. Neither couple reunited.

The fact that Lauren and Cameron from #loveisblind are still married 3 years later >>>>>>>>> pic.twitter.com/1gnBzduAfE

In news for the romantics out there TWO couples got married, and are still happily together to this day! Cameron and Lauren, the strongest couple on the show, and Amer and Barnett are celebrating three years together!

Love is NOT dead.