Read a sneak peek: Her Christmas Kisses by Susanne Bellamy 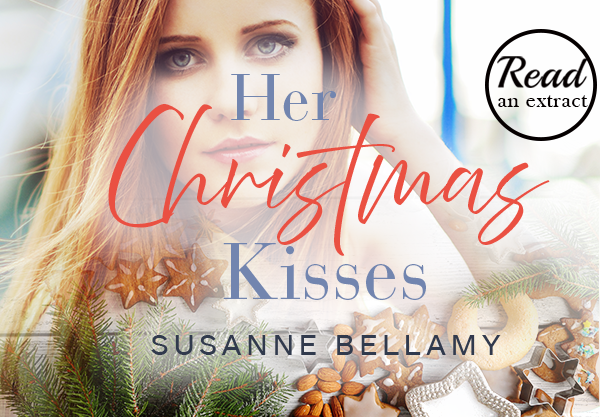 Devastated by her parents’ divorce and the impending sale of the family restaurant, Flick Ardmore is determined to find the money to buy the restaurant herself. She doesn’t expect to find herself stranded in Rainbow Cove with no car, no work, and no prospect of success.

Xander McIntyre, owner of the luxury Rainbow Cove Resort, is a workaholic developer with a looming deadline hindered by the arrival of his young special needs sister, Jenny.

When Flick connects with Jenny, it seems like the perfect solution to both their problems – if only Flick and Xander can ignore the undeniable spark between them. Or will their building attraction cause more problems than it solves?

Xander McIntyre had the door of the taxi open before it came to a complete stop at the western entrance to the Rainbow Cove shopping centre. He handed over two fifty-dollar notes. ‘Keep the change.’
‘Thanks.’ The taxi driver’s eyes lit up as he tucked the notes into a tatty, faded-black wallet. ‘Thanks a lot, mate.’
Xander nodded, slammed the door and strode around the back of the vehicle towards the far lane of the car park. He’d have known where to find the accident, even without the police information. A crowd had gathered midway down the lane, shoppers returning to their cars, passers-by drawn like vultures to a carcass. Overhead, a police helicopter veered away, and a news chopper edged into the air space above the crowd.
Xander shouldered through the onlookers, lifted the fluttering yellow tape and ducked under it, bypassing a uniformed constable.
‘Stay back please, sir.’ The constable, young enough to pass for a school student, thrust a hand in front of Xander in a futile effort to stop him.
Fuelled by adrenaline and anger, Zander ignored him and pushed past until he reached his target. ‘That’s my car.’ He stab-pointed in the direction of the silver vehicle now meshed with a small, red, parked sedan. ‘It was stolen two hours ago from my hotel and—’
‘Mr McIntyre?’ A plain-clothes officer held up his ID, stepped between Xander and his car, and waved off the rookie uniform.
‘Yes. And you are?’
‘Detective John Wilkins. The PolAir helicopter located your vehicle when it was spotted speeding down the highway and followed it here. Could I have a few words with you now?’
Xander inhaled a calming breath. The detective’s intervention was smooth and low-key. He took another deep breath and tunnelled irritated fingers through his hair.
There was a process to follow, but the wasted time grated. Tamping down his impatience, he turned from his car to the detective. ‘What do you need to know?’
The time? Two hours ago.
Where the car was parked? In the secure parking of my resort hotel.
Your hotel? Yes, I own it.
Long minutes passed as Xander answered the detective’s questions, and passed on details supplied by his security team.
A forensics team worked methodically, taking every item from the vehicle and dusting the car and its contents for fingerprints before setting each item in a row on a drop sheet.
‘How long have you owned Rainbow Cove Resort?’
‘About twelve months. Renovations are ongoing. The secure car park where my car was taken from is yet to be upgraded.’
Somebody has a lot of explaining to do when I get back to the resort.
‘Something is always last in a project that size.’ Detective Wilkins jotted a note in his book.
Xander glanced at his watch. He was cutting it fine to arrange for another vehicle before his sister’s plane landed. ‘How long will you need my car?’
‘It will be towed to the police lock-up yard for further examination. Your insurer will most likely have a hire car option available in the interim, but, say, a week. Yours is repairable. Can’t say the same for the other vehicle.’ The detective scanned the bystanders and the wider view of the parking lot.
Xander glanced at the red car, sparing a pitying thought for its unknowing owner. He extracted a business card from his wallet. ‘Losing my car is a damned nuisance, but the other car’s copped the worst of it.’
‘Extra annoying, I guess, since your car was taken from your own premises.’
Xander handed over his card. ‘Do you have a card in case I need to contact you?’
‘Sure.’ Wilkins handed one over and tucked Xander’s into his wallet.
‘I’ll be launching a full investigation into how this occurred.’
Thank God it was my car and not one of my guests’.
How would his sister react when he showed up in an unfamiliar car? According to their mother, Jenny was less inclined to become agitated by change since her operation, but Xander remained sceptical. Until he saw her for himself, he’d do whatever he could to avoid a repeat of his sister’s nerve-wracking tantrums.
The detective turned to the second uniform. ‘Any news on the other car’s owner?’
‘Yes, sir.’ A female senior constable stepped forward, flipped open a notebook and thumbed over a few pages and read the details. ‘Felicity Ardmore. Last known address is in Brisbane, Queensland.’
Wilkins bent down and peered at the car’s crumpled front assembly. ‘So, Queensland plates could mean the owner is here on holiday.’ He beckoned the young constable over. ‘Go into the shopping centre and get them to put a call over the speaker system for the owner to come to her car.’
‘Yes, sir.’ The constable lifted the tape and ducked under it, shouldering through the crowd in the direction of the shopping centre.
A young woman with auburn hair and an armful of groceries emerged from behind an elderly couple holding a trolley with a giant assemble-it-yourself inflatable castle. She slipped under the tape and came to an abrupt halt. Glossy pink lips formed an O shape as she stared at the red car. For several heartbeats her gaze was glued to the point of impact before she turned a dark blue gaze on Xander.
‘You. What the hell have you done to my car?’

In the grand tradition of Christmas Prince, Holidate and The Princess Switch, Love Hard is Netflix’s latest foray into the…Read more

Take the quiz to design the perfect Christmas movie, and we’ll tell you which holiday romance novel you should read…Read more