Read a sneak peek: Making Her Mark by Renee Dahlia 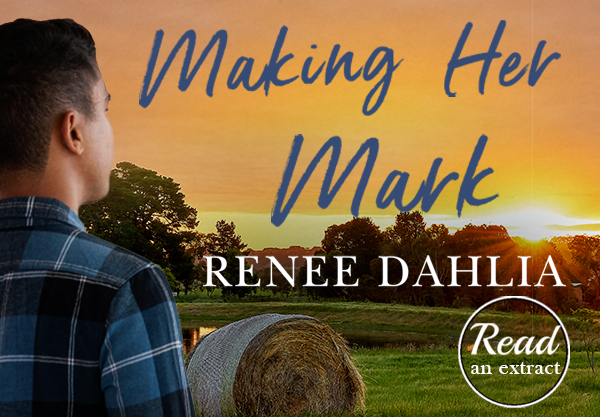 A brand-new Merindah Park story about second chances and risking it all for love.

I left the family horse stud behind at 16 to pursue a career as a jockey. I’ve been killing it in a male-dominated industry, and now all my hard work has paid off-my first group one win, the biggest success of my career. But I’m not celebrating. My girlfriend just dumped me in front of a crowded pub, and now I don’t even have a home to go to. The only saving grace is Allira, who I haven’t seen since school, who has offered me a place to stay. If only her hot-as-hell brother would stop visiting-I’m swearing off relationships, with men and women alike, to focus on my career.

I might be a top AFL player, but what I really want to do when my footy career is over is open up my own law firm. My teammates call me ‘Lawless’, but I’m anything but. I work hard to keep my public image sparkling clean; for the sake of my football career and my long term future. But now my foolish friends, and that woman-that stunning, bold, brash, athletic, beautiful woman staying at my sister’s house-are going to put it all in jeopardy. I can’t risk my reputation for the sake of the ones I love … can I?

Jacob knocked lightly on the front door of his sister’s townhouse. Allira lived close to the hospital where she worked at as an intern doctor in the Emergency Room, preferring to walk to work with coffee in hand. For two country kids who’d grown up in a small cottage rented from a local farmer, they had both become terribly citified. Jacob had lived in Melbourne since he was thirteen when he’d won an AFL scholarship to a big private school. He loved visiting his parents in their neat, small home with vegetable garden out the front, and the surrounding paddocks growing endemic foods for his father’s latest agricultural experiments. Being able to buy his parents some land of their own was his greatest achievement as an AFL player, the best part of earning decent money while playing sport. He tamped down the acerbic thought about the need to buy land for his family. Jacob happily paid for their smallholding as a thank you for the way they’d taught him how to balance between modern life with the colonisers and the ancient ways. How to thrive on the opportunities provided by playing sport, and never forget where you’ve come from. He knocked again on the door. He knew Allira had today off, and he’d given her plenty of time to sleep in. Jacob’s stomach rumbled at the thought of the lunch he was about to buy for her. He couldn’t wait much longer to eat, and surely, she’d be awake by now.
‘Coming.’ Her voice sang through the door and he grinned as she pulled the front door open, her black hair swinging loose around her smiling face.
‘Happy birthday, Sprout.’
She laughed, her shiny dark brown eyes dancing with glee. ‘Would you believe it, but I forgot it was today.’
‘I’d believe it. You never know what the date is. For someone with a medical degree, you are so out of touch with the real world.’
She pushed him on the chest. ‘Jacob. I have a big brother to remind me of the boring details of life.’
‘Even your own birthday,’ he teased. He always made a point of making time for Allira, she was five years younger than him and she had a big heart just like their mother. They had an odd relationship, close but unfamiliar, mainly because he’d lived as a boarder in the city during high school, while she’d stayed in Tranquil Waters with their parents. She’d only been eight when he’d left home, a little kid, and each time he came home for the holidays, she seemed to have sprouted, hence his nickname for her. Sprout.
‘Nah, seriously, I have an electronic calendar to tell me where I’m supposed to be. I added today’s lunch to it, but since I’m getting too old for birthdays, I didn’t add that detail to my calendar.’ She laughed.
He rolled his eyes, ‘Yeah, you are positively ancient at twenty-four.’
‘Feels like it some days.’
‘Maybe you shouldn’t work so hard. You have nothing to prove to anyone.’
A frown flashed over her face, gone as fast as it appeared. ‘We always have something to prove, Jacob. It’s the way of the world, unfortunately.’
He nodded. She spoke the truth. It was why he made sure the only time he was mentioned in the media was because he’d played a strong game. He worked hard to play a clean game, purposefully building a reputation for fair play. He’d been voted in the top five of the Brownlow—AFL’s best and fairest award—in each of the last three years, and this season should be his best chance to crack the medal.
‘Nice game on Friday.’ Allira echoed his thoughts.
‘Thanks. It’s good to be in the final eight.’ His team, North Melbourne, had finished sixth on the table, and they had a good chance at making the finals.
Allira shoved him on the arm, ‘Yeah, the next month is going to be so exciting.’
‘Excuse me.’ A quiet voice came from behind him, and he turned around to see a tiny slim woman in tight pants and muddy ankle boots standing on the driveway at the bottom of the steps. Perhaps she only seemed smaller because he was standing at the top of the three front steps to Allira’s tiny townhouse and she was on the driveway below him. Allira pushed him to the side, stepping out of the doorway, and waved enthusiastically at the small person.
‘Hey, Rachel, come in. This is Jacob, he’s my big brother.’
‘Hi.’ She had a streak of mud across her cheek, with fingerprints in it, as if casually wiped away, and a big patch of mud on one shoulder. She turned slightly as Allira stood at the top of the stairs, and Jacob could see the mud extended all the way down across her very tidy arse and slim legs, an adult woman’s heart-shaped arse encased in tight pants. He dragged his gaze away from her body, and tamped down the flush of lust rising inside, to focus deliberately on her face. Somehow the mud made her brown eyes look sharper, a shade lighter than his own, and her gaze pierced his.