Read a sneak peek: The Christmas Witch by Carla Caruso 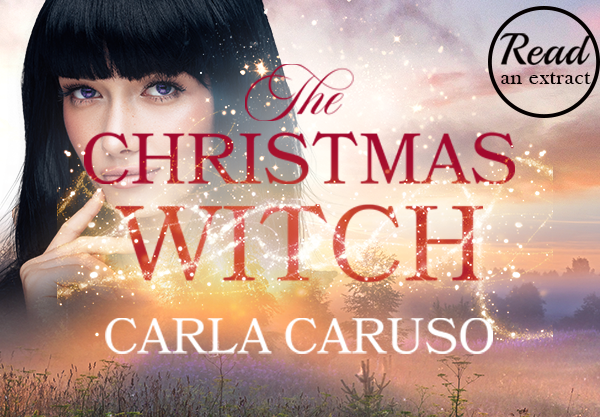 Thunder rumbled in the distance and moisture in the air made Mina Rosso’s hair frizz about her face. So typical.
But despite her bad do, and the thrum of rain on the awning above, she felt warm and fuzzy as she peeked through the pizzeria’s window. Sheltering from a shower had never been so fortuitous.
Her gaze was fixed, a few metres away, on table number nine. There, her true love sat, toying with his car keys. Arlo. She drank in his chin-length dirty-blond hair, goateed jaw and bronzed skin. It was hard to believe only a sheet of glass divided them after so long. In the shadows, she pressed a hand to the foggy side-window, like an indoor plant desperate to have the sun’s glare on its leaves.
Behind the glass, Arlo’s face suddenly broke into a grin and Mina’s insides unfurled like the petals of a gelato-pink peony. Still grinning, Arlo got to his feet, stretching out a broad hand … and her magical feeling dissipated.
His hand claimed the pert waist of a new arrival. A brunette who, if her tresses hadn’t been so glossy, her posture so confident and her heels so high, could have been Mina’s double. Slightly younger double. Good thing the pizzeria’s front door was around the corner and the woman hadn’t seen Peeping Mina.
The Other Brunette, also known as ‘Camila’, shook rain off her hair. She looked like an Insta-model rather than the drenched sheepdog Mina no doubt resembled. Arlo leant to kiss her, on the mouth, and Mina licked dry lips, jealousy knifing at her heart. As he pulled back a chair, Mina clocked the little bundle on Camila’s other hip.
The married pair’s adorable baby boy.
A sob caught in Mina’s throat and a sad Andrea Bocelli tune cued up in her mind. She hadn’t seen Arlo since he’d become a dad, maybe because he’d been cocooned in the baby bubble. She flicked up the collar of her pleather jacket, chancing one last look at the picture-perfect family … just as Arlo turned her way. Sucking in a breath, she ducked her head and pelted away on the wet concrete.
The driving rain and occasional spray from a passing car helped provide a reality check. There was no point in lusting after someone she could never keep. Witches and humans didn’t have happy endings—end of. It was why she’d cast a he-loves-me-not spell all those years ago to ensure their relationship stayed broken after their first fight. She’d known there was no advantage in prolonging the inevitable heartache, even if she’d yielded to the madness of love for a short time. Whether he would have dusted his hands of her anyway remained unclear, but it had been self-preservation all the same.
Spying her parked car up ahead, Mina slowed her pace and wiped her nose with the back of her hand. If she really loved him, she should have been happy he’d found another soulmate, another life.
But as Taylor Dayne warbled, back in the eighties, tell that to her heart.

‘Madonna santa!’ Mina held her feather duster aloft, staring at a pot plant that’d been tipped sideways on the shop floor. A gust through the window was to blame, the aisle now scattered with soil and ceramic shards … though she’d just spent an eternity cleaning that shadowy corner near the shopfront.
A clean-up incantation hovered on the tip of her tongue. But Sutton, her wannabe Wiccan colleague, was within hearing range, and she’d die if she ever found out that Mina was a real witch. Then there was the risk of Gardenia at the luxury real estate office across the road catching Mina using her abilities in broad daylight … While Gardenia was of the dark witch variety and Mina the good ‘red’ kind, there was still a code. Finding the dustpan was safer.
Ditching the feather duster, Mina leant to close the window. Along with the shop having cold spots, her hometown of Hilforest generally had one season: winter. It didn’t matter what was happening in the rest of the state, in the Adelaide Hills spot it was always several degrees cooler, as well as being a magnet for drizzle and mist. Little wonder witches flocked there. Not that Mina had anything in common with the kind who did, her family aside.
She readjusted her green knitted shawl and went in search of a dustpan. Wandering through the shop’s various ‘rooms’ of retro treasures gave her the usual thrill. Sale items ranged from artfully worn leather couches to quirky vases and old-fashioned bar carts. Being surrounded by so much aged wood was also the closest Mina could get to hanging out in an actual forest all day.
Sutton was busy serving a red-haired woman at the counter. To Mina’s eye, the woman’s buy—a wooden jewellery box—now emitted a joyful pink glow; a huge improvement on the melancholic blue aura it’d come in with. (Seeing auras in furniture was another witch ability she’d acquired.) The piece had found a happy new home. Yay.
Mina had no luck finding the dustpan, but she did unearth the broom, appropriately, in the broom closet. Returning to her window spot, she began to sweep, humming along to Monster Mash on the radio. A fringed lampshade to her left randomly flickered—
‘What the hell is this?’
Mina swung around at the sound of the gravelly voice behind her. Goose-bumps broke out all over her skin. A guy in his thirties, clad in all black—designer black—towered in her path. He had unconventional good looks: tousled brown hair, heavy brows, and a bristly cleft chin. Woody cologne also now permeated the air. Shame about his turn of phrase.
Her gaze dropped to the blue kyanite in his hand. She’d left the crystal atop an apothecary cabinet, from a divorce settlement, to clear it of negative energy.
‘Um … it’s just decoration, really.’ She attempted her best customer-pleasing smile while still clutching onto the broom. ‘Pretty gem, isn’t she?’
Grimly, the guy returned the ocean-coloured rock to its home. Maybe his lack of a smile hid bad teeth … He swivelled around, now gesturing at Mina’s plant stand by the window. She’d rescued all the plants, abandoned by their previous owners on the footpath for others to ‘adopt’. This included the one that’d just tipped over. Mr Eder had always been happy for her to sell them in-store.
‘Why are these plants here?’ the guy demanded. ‘They’re not antiques.’
Mina frowned; she couldn’t help it. What was this guy’s deal? Was he, like, a mystery shopper, checking out their level of customer service, or just someone determined to take his bad day out on everyone else? His rugged good looks were being tainted by the microsecond.
Gritting her teeth, she tried her best lure-a-bug-into-her-silvery-web approach. ‘No, they’re not antiques, but science shows greenery makes us happier. And doesn’t everyone need a pot plant or five in their life?’
The scowl hadn’t left the guy’s face. Some days she liked the challenge of a tough customer, but this wasn’t one of them. Mr Entitled now strode over to a bookcase, where one of Sutton’s hand-poured soy wax candles—her colleague’s side hustle—was adding a nectariney sweetness to the air.
The guy’s hazel gaze narrowed further. ‘Are you aware this is a fire hazard?’
Mina’s mouth fell open. She hadn’t noticed the bloke borrowing her broomstick to shove up his arse! As her brain formed a veiled gibe in response, Sutton sprang into view. As usual, she looked both ethereal and goth with her green-streaked blonde bob, sooty eye make-up, and septum piercing.
‘Mina!’ Sutton widened her eyes, on repeat, behind the guy’s back. ‘I see you’ve met Mr Eder’s son, Jadon. Our new boss.’
Holy cats. Mina’s chest tightened. ‘Oh … ha.’
Their new boss, a day early … while she grasped a broomstick and sported a shawl like a total craggy witch! He must have snuck in after the jewellery box customer! If only Mr Eder had flashed around a photo of his son, or she’d dared google Jadon in readiness. All her nightmares about Mr I-Work-in-Milan had come true. Why couldn’t Mr Eder’s fall have happened in-store? Then she could have (discreetly) helped him with her sorcery and not been stuck with his unfairly handsome offspring.
Somehow, she managed to properly introduce herself to Jadon. Not that he seemed interested one iota. Instead, he glanced around the place like he’d sniffed out a dead possum.
‘Thought I’d duck in on the way from the airport,’ he clipped. ‘But, be prepared—tomorrow I’ll hit the ground running and be looking to make changes ASAP. Improve this store’s figures. The place looks like a freaking hippie shop.’
Then he turned on his leather brogues and strode away, leaving Mina reeling. Niceness definitely didn’t run in the family (nice looks didn’t count). Jadon had only just arrived and was already throwing his weight around with a planned shop overhaul.
Welcome to Mina’s even more cursed life.