Read a sneak peek: The Magic of Christmas by Alyssa J. Montgomery 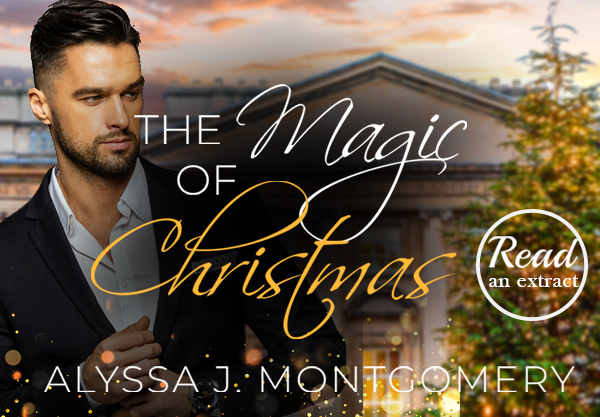 ‘Watch out!’
Jack Mancini turned the corner into Oxford Street and cannoned straight into someone.
Damn it!
Jack couldn’t see properly. A long strand of sparkling tinsel flew straight up at his face and his hand shot out in a reflexive action to swipe it away. Simultaneously, there was a tug at his shirt as the person he’d rammed into grabbed at the fabric to try to steady themselves.
Jack cursed as buttons ripped off making his shirt gape open.
Looking down, he saw he’d barrelled straight into a guy who’d been carrying a box of damned Christmas decorations. It was only late October but of course this guy and other workmen were already starting to put up the Christmas finery so London’s most famous street could be lit up from the first week in November.
Bloody hell! It seemed Christmas was intent on confronting him at every turn today.
The man lay sprawled on the pavement and a seemingly endless number of large gold and silver balls bounced then rolled into the gutters—along with several of Jack’s buttons.
Pedestrians uttered loud profanities as they dodged the balls, but none of them stopped to help.
That’s Christmas spirit for you! Jack thought with disgust.
‘I’m sorry.’ He extended a hand to help the man up.
‘I’m okay.’ The bearded guy got to his feet and brushed down his trousers—his green trousers.
‘I should’ve been more aware of where I was going.’
‘No harm done. I think you’ve come off worse than I have.’ The man pointed to Jack’s shirt. ‘My apologies.’
The problem of his damaged shirt was temporarily forgotten as Jack looked more closely at the chap. The guy’s beanie was askew and Jack blinked.
No! Seriously? The guy’s ears looked pointed.
Jack shook his head as his victim pulled the beanie back down securely over his ears.
Surely he was mistaken? The guy had to be in some sort of fancy dress costume.
‘Would you mind helping me gather up the Christmas balls?’ the man asked.
Christmas hit a solid blow to Jack’s gut.
The sight of shining giant baubles and thick rolls of gold and silver tinsel made him break out in a cold sweat but, as it was his fault the decorations littered this part of Oxford Street, the least he could do was help pick them up.
Stooping down to collect them, Jack shoved them back into the box quickly. Looking at them was bad enough. Having to touch them was even worse. Jack struggled to control all outward signs of his aversion to this supposedly festive season.
‘Hope you’re not going anywhere important.’ The man pointed again to the damaged shirt.
‘Back to the office.’
‘You might have to go home and change first.’
Jack could easily walk into a shop and buy another shirt, but for some reason the thought of diverting home appealed. Perhaps he needed some time alone to get his head around Amadeo’s news. ‘I will.’
‘Oh well—’ the guy shrugged, ‘—these things happen for a reason, you know.’
What a load of rubbish! There was no reason for this to have happened except that Jack’s mind had been on his lunch time discussion and he’d rounded the corner too quickly.
Anyway, Jack didn’t believe in fate. He was master of his own destiny.
As soon as the decorations were back in the box, the man he’d knocked over gave him a broad smile and a wink. ‘Thanks for your help. May the magic of Christmas find you this year.’
The magic of Christmas!
Huh! Jack only just refrained from scoffing a ‘Bah Humbug’ at the guy.
Christmas be damned.

The Magic of Christmas by Alyssa J. Montgomery will be available from the 12th of November 2019

One gourmet party. Six potential couples. The taste of love? Nico De Luca has been doing his best to keep…Read more