Read a sneak peek: The Postmistress by Alison Stuart 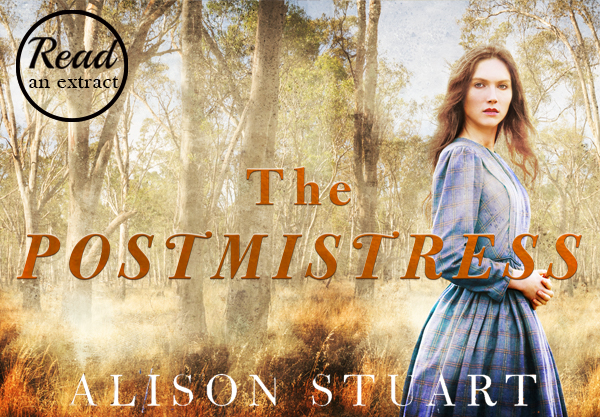 The fiddle player who had been entertaining the bar with Irish ballads picked up the old melody.

Caleb broke off with the drunken realisation that it had been seven long years since he’d crossed the Missouri, never to return. One more whiskey and he would be sobbing on the bar.
‘Got to get back to my lodgings,’ he slurred at the barkeeper as he paid for his drinks.
‘Good luck with the claim—’ the barkeeper said.
Caleb stepped out onto the street.
For November, the night was oppressively warm and the waterfront street was busy with trade from the many pubs and brothels. He crossed the road and stood on the water’s edge looking out into the night. Beyond the stinking mud flats, the riding lights of innumerable ships shimmered across the calm, still water of Hobson’s Bay. Beyond the boats, distant pinpricks marked a settlement on the far shore.
His soldier’s instincts prickled, and he turned in time to catch the gleam of a knife in the street lamp as a man lurched out of the darkness.
‘Don’t do it, Hannigan,’ he said, holding up his hands and stepping backwards. ‘I’m not armed,’ he lied, the familiar weight of his Colt revolver resting against his hip, hidden by his jacket.
‘You took my claim!’ Hannigan lunged, but Caleb sidestepped and whirled on his heel, sending Hannigan staggering past him. The Irishman turned, his lips bared in a snarl.
‘You don’t want to kill me,’ Caleb said. ‘I reckon that’d be a hanging offence in this town. Nasty way to die.’
The knife wavered and Caleb held his breath, his fingers itching to draw the Colt. But he didn’t want to shoot the man. It had been just such an unfortunate misunderstanding that had led to his hasty departure from San Francisco.
Hannigan gave a sob and moved the knife to his own bearded neck. ‘I’ve nothing left,’ he sobbed. ‘May as well just—’
Caleb jerked forward to stop him but he doubted Hannigan had the guts to end his own life. ‘Listen, Hannigan,’ he said, ‘I’ve a proposition for you. ‘Tell me about this claim of yours.’
Hannigan’s hand dropped to his side. ‘What do you want to know?’
‘Is there gold at this … Pretty Sally?’
‘Oh, there’s gold,’ Hannigan said. ‘The alluvial stuff’s gone but there’s a reef running through the hillside.’
‘How do you get it out?’
Hannigan spluttered. ‘What do you know about gold mining?’
‘Some,’ Caleb said. ‘Dig it up and stomp it out of the rocks?’
‘That’s pretty much it.’
‘Sounds like hard work.’
‘It is. And bloody expensive too.’
Caleb scratched his unshaven chin. ‘I have a problem, friend. A problem you might be able to help me with.’
‘What’s that?’
‘I now have the right to mine a piece of land for gold, but I don’t know where this land is and what I know about gold mining you could write on a postage stamp.’
Hannigan straightened. ‘So, what are you proposing, Yankee?’
‘Nothing if you are going to call me by that name.’
‘So what do I call you?’
‘Caleb Hunt. How were you planning to fund this expensive expedition?’
The man sucked in a breath through his moustache. ‘I came to town to register the claim but I needed money to pay for the equipment I ordered from McEwan’s. I thought there would be easy money to be made with two-up—’
‘My father used to say, never gamble with money you’re not prepared to lose.’ Caleb’s father would never have considered gambling at all—the words were good advice from a friend that Caleb had consistently failed to follow in his life.
Caleb took out his pipe, filled it with tobacco and struck a match on the sole of his boot. He drew in the smoke and kept his eyes fixed on the twinkling lights of the boats. ‘I think you and I could strike up a deal, Hannigan. I’ve got the money you need for the equipment, but I need someone who knows what he’s doing to work the claim. I’ll pay you a fair wage and, if we strike gold, then you get ten per cent of the profits. Does that sound fair?’
The Irishman’s beard jutted. ‘But it’s my claim.’
‘Not any more. That’s my offer, take it or leave it.’
Caleb straightened and started to walk away, leaving the big man standing on the sidewalk, the knife still in his hand. He half-expected the knife between his shoulder blades but if he had judged the man rightly, Hannigan was no murderer. Hotheaded perhaps, but not one to knife a man in the back.
‘Wait, Yankee.’
Caleb smiled. Hannigan would continue to call him ‘Yankee’ precisely because he knew it annoyed him, but if that was the price of this man’s cooperation, it was worth it. He turned back to face Hannigan, relieved to see he no longer held the knife.
The Irishman spat on his hand and held it out. ‘A deal, Mr Hunt.’
Caleb returned the gesture before wiping his hand on his trousers.
They arranged to meet in the morning and Caleb went back to his lodgings in the dingy street behind the main thoroughfare. As he washed his hands in the battered tin basin, he hummed the tune of ‘Oh Shenandoah’ with the sense that, for the first time in seven long years, he really had crossed the Missouri for a new life at the bottom of the world.