Read an Extract: The Round Yard by Alissa Callen 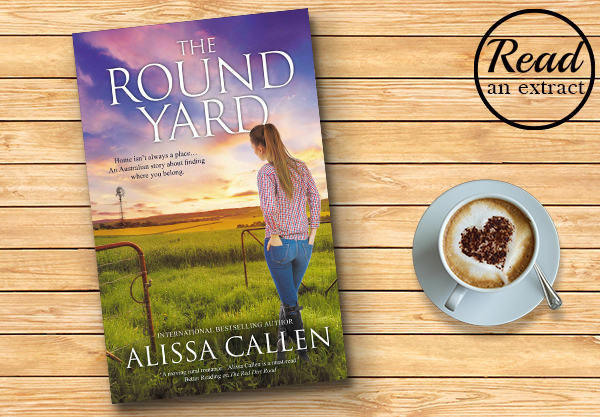 A heartfelt story about finding where you belong. A new Woodlea rural romance by bestselling Australian author Alissa Callen. 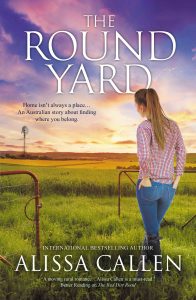 For only child Neve Fitzpatrick, family is everything. When she loses her mother, she heads to the bush to rent a farmhouse near her grandmother’s family home. To keep herself busy and her grief at bay, she offers to look after two little redheaded cowgirls and adopts a sassy pony and shaggy donkey in need of a refuge.

Drover and horse trainer Tanner Callahan may have just found his mother, but he’s resolved never to let anyone too close. Abandonment has cursed him all his life, and he won’t let it happen again. Only two things unnerve him: children and small–town matchmaking. Then he meets occupational therapist Neve. Warm–hearted and unforgettable, she represents all that Tanner feels will forever remain out of reach.

But when an old iron key unlocks family secrets from the Second World War, Neve needs help only Tanner can give. As the threads of the past unravel, and locusts threaten to suffocate the land, Neve and Tanner must make a choice. Will fear keep them running or is the home each yearns for already within grasp?

Even an hour had been an optimistic estimate of how long it would take to get Dell and Bassie back into their paddock. The usual bribery of hay failed to work, so Neve used their need to evade her to eventually direct them through the gate.
If either animal had been wearing a headcollar she would at least have been able to catch them. But the day after they arrived both headcollars had been removed. She hadn’t been close enough since then to put them on again. She still didn’t know who the clever culprit was who’d taken them off.
Once Dell and Bassie were where they belonged, Neve made sure the electric fence was intact and the red light of the charger blinked. As purple shadows dappled the lawn and the first blush of sunset brushed the sky, she went inside.
A coffee in one hand and her phone in the other, she settled onto the end of the living-room sofa. From such a position she had an uninhibited view of the electric fence through the large front window. She’d kept watch before, and if she had any hope of outwitting the terrible twosome, she needed to stay one step ahead. The only way to do this would be to discover how they escaped.
She was swapping texts with Ella about what to wear to the upcoming festival when Dell and Bassie approached the two strands of electrical tape that formed the gateway. The plastic-handled metal hooks that slipped into the loops on the corner post didn’t carry any charge. Bassie and Dell appeared to sniff at the hooks. Dell then pulled the bottom hook free even before Neve realised one strand of white tape sagged onto the ground. If she wasn’t so dumfounded, she’d have been impressed.
She sprang off the lounge and used her phone to film Dell ducking under the remaining wire and Bassie pawing the ground before he followed. The donkey and pony touched noses then ambled towards the pots of sunflowers growing alongside the garden shed.
Neve headed outside. Logic told her that Houdini Dell had more than one escape method as this was the first time the tape at the gateway had been removed. She had more hope of plugging holes in a bucket than of keeping Dell and Bassie where they were supposed to be.
Another hour and a half later, and with only the pale wash of moonlight to see by, Dell and Bassie were in their paddock. Neve double-checked the knots on the baling twine she’d used to secure the gate hooks.
‘Sleep tight,’ she said, rolling her shoulders to ease her weary muscles. Dell lifted a heavy eyelid to give her a placid look. Bassie ignored her. ‘I know I will.’
But as Neve lay in bed, a loud bray from outside her bedroom window startled her. She groaned, rubbed at her forehead and reached for her phone on the bedside table. It didn’t matter how awkward or out of her depth she’d feel around Tanner, it would soon become a safety issue if the girls were in the garden with Dell and Bassie. She also couldn’t impose on an already flat-out Denham. Stomach swirling, she texted Fliss for Tanner’s number before her self-preservation had a meltdown.
image

Read more from The Round Yard by Alissa Callen 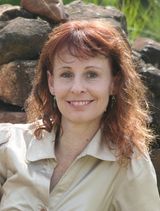 USA Today bestselling author Alissa Callen is a country girl happiest living far from the city fringe. She draws inspiration from the
countryside around her and from the resilience of local bush communities. Once a teacher and a counsellor, she remains interested
in the life journeys that people take. Her books are characteristically heart-warming, authentic and character driven. Alissa lives with
her teenage family on a small slice of rural Australia near Dubbo in central western NSW.

To find out more, visit Alissa on her website.