Action! Adventure! We see it in movies, we enjoy it in games, now we can experience it in books. Set your heart racing, feel the breathlessness, and savour the adrenalin rush as you ride the emotional rollercoaster in our action/adventure novels.

Suspense is about the build-up, rocketing the reader toward a massive finish. Action/adventure on the other hand, is about fascinating characters who experience an exciting, danger-fuelled journey. There’s plenty of cliff hanger moments in action/adventure and just when you think it can’t get any more exciting, it often does.

Lost In Kakadu – by Kendall Talbot

When a small plane crashes into Australia’s harsh Kakadu National Park the survivors think they’re lucky to be alive, until rescuers never come. The plane crash isn’t the only action. It was important for me to keep the survival aspect very real. From wild animals, to wild weather and near starvation, every day my characters have a new aspect of living hell to get through. Fate brought them together but they need more than luck to escape Kakadu alive.

The snake began to move. It slithered with deathly silence toward the tree trunk. Abi knew she had to get the axe, but the thought of going anywhere near that thing made her cringe.

As it slithered down the trunk, she unzipped the backpack trying to be as quiet as possible. Can snakes hear? Something about them hearing through vibration ran through her mind, another useless piece of trivia from Spencer. But was it so useless now?

With the axe now in her hand, she felt a bit more confident. But can I really kill it?

She spied Mackenzie out the corner of her eye and resisted the urge to look in his direction. I have to do this. He needs me now. The snake moved fast, slithering down the trunk as if being sucked down by gravity. She stood frozen, axe poised over her shoulder, her heart pounding out like drums of war.

The snake reached her head height, her waist, knees, it was at her feet. It was faster than she thought and most of it was on the ground when Abi squealed and brought the axe down.

Getting Wild – by Sarah Barrie

Getting Wild takes a look at what happens when a born and bred city girl is forced into the wilds with an adventure-toughened alpha hero. The storyline combines romance and adventure with a good dose of humour thrown in, though for the character, the dangers are very real. In order to survive her ordeal, the heroine must challenge herself daily, battling not only the elements, but her own innate fears and limitations.

Adrenaline coursed through Ella’s body as she prepared herself for whatever was about to happen, but her smile was calm and threatening, her tone cold. “How about you just try that?”

He looked at his mate, shrugged and smirked. “Hear that? She’s asking for it.” As soon as he stood up, Lexi pushed past him to stand behind Ella.

The blonde man made a grab for Ella and she delivered a fast-flying elbow to his jaw, sending him stumbling back into his chair. “Go,” she repeated, and heard Lexi take off.

Blonde idiot was stunned enough to eye her warily for a few seconds, before coming in again. “Oh seriously?” Ella asked in disbelief, “You’re almost too drunk to stand up as it is. I could blow you over.”

“What about both of us?” the shorter of the pair piped up, looking less confident than he made out as he got to his feet.

Ella just smiled. “Sure, what would you like broken?” 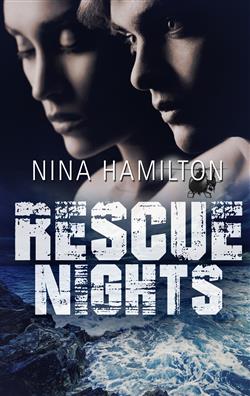 Rescue Nights is a romance with an adventure/medical twist up in Australia’s Far North. Kate and Andrew are a paramedic and doctor working in Cairns’ helicopter rescue teams. The heat between them is palpable as they struggle for both dominance in the workplace and securing the best outcomes for their patients. Cairns’ location on the edge of the Great Barrier Reef means they are always on the cusp of pushing the limits of what a rescue team can do.

Everyone seemed to ignore her statement as Andrew continued talking. ‘I don’t think she’s taken enough water to be an immediate risk of secondary drowning. I’ll put her on oxygen and we can wait.”

Andrew didn’t seem to be worried about her consent as he looped the oxygen mask onto her face. She could hear him curse as he stripped off the top of his own, still-dripping flight suit. He certainly hadn’t been appropriately attired to enter the water today.

‘Hold this over your eye,’ he said, giving her a wad of gauze. It was only then that Kate realised that some of the moisture running down her face was blood.

Her throat felt unbearably swollen and she had to concentrate on getting the breath to her lungs. That was probably why she didn’t see Andrew taking the scissors to her wetsuit until it was too late.

She moved her oxygen mask to one side. ‘Margo will get you for this. Do you know how much this wetsuit costs?”

Why do we each write action/adventure?

Quite simply, because it’s fun. Everyone likes romance, at least, if they’re reading this blog we imagine they do.

But what puts that constant coil of tension in the pit of your stomach? How about that little kick from a touch of danger in every chapter, that extra ripple of excitement at a risk that reaches much further than that basic – yet dangerous – dive into love?

Whether it’s good vs evil or survival of the fittest, our characters challenge the elements, or each other, and in the course of the story could battle everything from wild animals to drug-runners, experiencing explosions, fights, chases, and impossible situations only limited by the imagination. Action/adventure adds another level of tension, makes heroes and heroines vulnerable from more quarters than their emotions toward each other. Because no matter how tense, how risqué the relationship, romance is just that bit more dangerous, more thrilling, against a backdrop of risk and physical danger.

And who doesn’t like a strong, brave hero/heroine? Sure, they have to have their faults, their weaknesses – that makes them human, but to read along while that very human character overcomes their flaws and insecurities, their vulnerabilities, to battle the bad guys and kick-ass against seemingly insurmountable odds? That’s a page turner. That’s a memorable, uplifting story.

Strong men tick all our boxes. Call us old fashioned but we love the Indiana Jones stereotype. Sure, Indy’s not perfect, but he’s sexy as hell. He defeats the bad guys in style and gets the girl – all in a day’s work.

We like strong women too. Women that don’t necessarily need rescuing – women that pull themselves out of tricky situations and keep a certain style about them while doing it.

It’s sometimes said that romances built in stressful situations can’t last. It’s fun to oppose the theory. Lots of fun. Because really, why can’t they?

What inspired of you to write such fast paced stories in unique Australian settings?

Sarah: What better place to set an adventure? Australia has some of the most deadly animals in the world and enough dangerous terrain to keep the characters in a state of constant peril for even the longest of stories. And that’s without any bad guys!

Nina: One of the reasons that I have set both my action/adventure stories in Cairns is simply that I think it is one of most interesting and physically beautiful places in Australia. There aren’t many places on earth where just a helicopter ride away are rainforest, reef and farmland.

I like writing fast paced stories because that’s what I am interested in reading. I love that ordinary Australians do heroic things in their day to day lives and I think a couple who shares a professional world of both danger and bravery are probably forging a relationship that we’d all enjoy watching develop.

Kendall: I grew up watching Indiana Jones, Jurassic Park, Die Hard, all great action/adventure movies. I still love them. They’re the type of books I love to read too and that’s where my writing passion lies too. Kakadu National Park is 20,000 acres of pure Australian bush, with an abundance of wild animals and exotic settings. It was the perfect place for a survival story with a difference. Lost In Kakadu is the only romance book ever to be set in Kakadu National Park.

If you were stranded in the Australian outback what is the one survival technique you would want to know?

Sarah: How to find water. Nah, who am I kidding? I’d want to make sure I knew how to find a gorgeous, adventure-toughened hero to come and rescue me. Whether I needed rescuing or not!

Nina: I feel like I have to break a myth from the 80’s romances I know I loved to read. I gained a lot of great knowledge from books over the years, but on this one the information has changed. DON’T suck the snakebite. You know that great scene where the heroine will bravely score the snakebite with a knife and suck the poison into her mouth. DON’T do that. Keep them quiet, stick on a pressure bandage, add a splint and call for help. Then you can hope that the hospital has a doctor as smoking as Andrew and know he will admire your bandaging technique.

Kendall: I’d definitely want to know how to make a fire. Not only because I couldn’t imagine eating raw snails or lizards, but after that scrumptious meal cuddling up to my man and staring into the dancing flames is a great way to while away the hours.