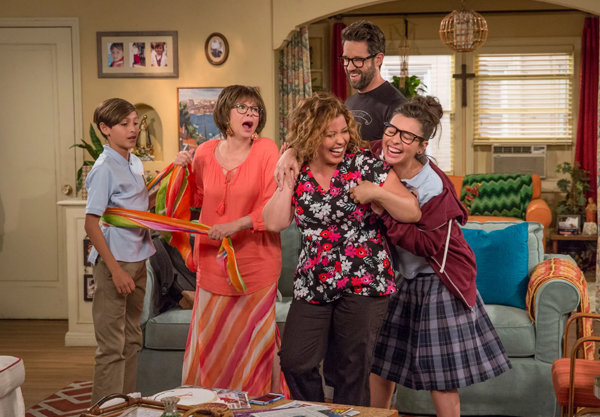 One Day at a Time is an American comedy based on the 1970s sitcom of the same name. It follows the lives of the Alvarez family, a Cuban-American family who live in LA, and explores themes of race, mental health, sexuality and privilege. If you haven’t seen seasons one to three, then you are missing out! Available on Netflix, it is the perfect relatable yet funny content we need in our lives. Here are six reasons why we are excited for season four, which has just dropped on Pop TV.

One Day at a Time is witty, warm, loud and just a whole lot of fun. And yet it doesn’t take much digging to uncover the more serious themes in each episode. With a deft hand, this show tackles racism, sexism, politics, addiction, depression, motherhood, class, romance, religion, and many other timely issues. Rather than feeling preachy, the flawed characters are right alongside the viewer as each topic is explored. From Penelope admitting she needs some time to adjust to her daughter coming out, to Schneider falling off the wagon in season three, the lack of moral high ground is what works for this series. We cannot wait to see what topical issues will be explored in season four.

Penelope is many things: Cuban, nurse (soon to be nurse practitioner), daughter, lover, war veteran, and friend. She is also an incredible mother to Elena and Alex, doing her best to guide them through their teenage years in one piece. She teaches them how to face racism head-on, disciplines them over drug use or irresponsible spending, and supports them as they risk their hearts. And even when she fails, which she inevitably does, she is quick to apologise and learn from her mistakes. The scene where she steps in at Elena’s quinceañera for the father-daughter dance is incredibly moving. She is the kind of mother we all wish we had, or hope to be, and seeing more of her on our screens can only be a good thing.

Schneider. Honestly, the show would just not be the same without this white, privileged, ‘trust-fund-man-child-baby’ whose yearning to belong drives him into the Alvarez home on a daily basis. Often acting as the recipient of life lessons on race and privilege, and an important comedic release, Schneider is happy to have his privilege called out so long as he is included in the family. He epitomises one of the key themes of the show: that family, whether biological or not, is everything. We have so many questions about Schneider going into season four: Will he recommit to his sobriety? Is there a future for him and Avery? Will the Alvarez family officially adopt him?

3. Keeping it real on mental health

Penelope is an army nurse veteran, and part of her journey is coming to terms with her depression and PTSD. Like many issues, the show doesn’t tiptoe around Penelope’s struggles. We see that managing her mental health is a daily effort that requires therapy, friends, community, family support and anti-depressants. The episode where Penelope stops taking her medication is heavy, but it is also real and beautiful as we see the people in her life step up for her. Normalising mental health in this way is so important in a time where it is still stigmatised, and each episode showing Penelope killing it is a huge step forward.

One Day at a Time is the absolute boss of portraying diversity in a non-tokenistic way. Characters who are whole, complex people, with their own flaws and passions and character arcs, who also happen to be Cuban or queer or gender nonconforming, and unashamedly so. Again, the show uses other characters’ ignorance to educate on important issues, whether that’s Penelope calling out her co-worker Scott on his sexism in the workplace, or Elena educating her grandmother on the correct use of pronouns for gender diverse people. Having shows like this on our screens is so important, so bring on season four!

No sitcom is complete without a healthy amount of romance, and this show delivers! There is the slightly awkward and very confusing relationship between Lydia and her ‘non-sexual platonic companion’, Dr Berkowitz (how on earth did those two end up in Cuba?), there is the blossoming new love of Elena and Syd, and the sweet romance of Schneider and Avery who both try and hide their wealth from each other (those two had better sort it out). But the romances we are most invested in are Penelope’s. Penelope gives so much of herself to the people around her, that all we want is for her to find her happy-ever-after. And while we are totally on board with her not needing a man to make her happy (yes, queen!), if she wants a man in her life then we are here for it. We were all hopeful that the cameo of hunky paramedic Max in the last episode of season three was the hint of something to come, but alas it was not to be. BUT there have been promises of a new love interest in season four, and we are so ready.

Looking for a Feel-Good read? Check out some of our favourites below…

Sweet Magnolias is almost here! Season 1 is dropping into our Netflix feed from May 19th and we cannot wait…Read more

While trying to ensure that his sister’s wedding day goes smoothly, Jack finds himself juggling an angry ex-girlfriend, an uninvited…Read more