The Highs and Lows of A Christmas Prince 2: The Royal Wedding 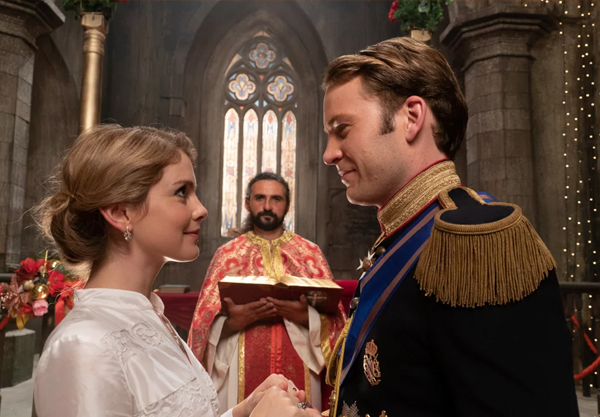 The key principle for wringing the most enjoyment possible from a Netflix Christmas movie is: go in with low expectations. For a sequel that was made due to the first movie being a surprise hit, due to said movie somehow hitting a near impossible balance of ridiculous and charming, my expectations were as low as the South Pole.

Probably the greatest cinema event of our time. #ChristmasPrince2 pic.twitter.com/yptAZGxY0y

This is a movie about the happily ever after of two people who barely had any plot to keep them apart to begin with, apart from him—prince her—commoner; him—momentarily-arrogant her—momentarily-clumsy … so what surprised me the most was that A Christmas Prince: The Royal Wedding had a surprisingly solid plot! Taking not so much a leaf as the entire block from The Princess Diaries, ACPTRW (as we will call it) runs on the premise that a dastardly villain is embezzling away the kingdom’s fortunes, and therefore putting the WEDDING and the future of the prince and his journalist in peril.

High points: When the teenage princess turns out to be a HACKER because OF COURSE SHE IS. (I was a little disappointed that there was no Jurassic-Park shout-out reference to Unix though.) I also hooted in delight when Sour Simon (who was almost a little too creepy last time) joins the Scooby Gang, giving just the right sprinkling of cynical to their cinnamon spice.

Low points: Pretty much every time the hero and heroine went to kiss, or did kiss? I felt zero chemistry between them this time, I just wanted to get back to the gang solving royal crimes.

Moments that I could not decide if they were hilarious or terrible: When Amber and Richard bail up the royal family and … make sure they are now in control of the aesthetic details of their wedding BEFORE they deal with internal treachery and embezzlement. PRIORITIES guys.

I had mixed feeling also about us getting to SEE the awkward pre-teen Aldovian pantomime …and the whole folktale with Santa Claus as a magical baby. HILARIOUS or TERRIBLE I don’t have an answer.

Lol at the magazine covers too. “A Journalist Queen.” I am deceased.

** did anyone else LOL at the magazine simply called ‘COVER’?**

Missed opportunities: Why did Simple Simon and gorgeous Melissa get several moments of magical-Christmas frission-time, but cinnamon-roll Andy and diva Sahill got barely a look? I would have enjoyed Sahill getting a relief-from-comic-relief hero moment where he helps save the day and um, got to step out of the stereotype for a couple of minutes? Did we really need a storyline about the childhood of the palace chef instead of a bit of an arc for one of the few characters of colour who was also a key antagonist for Amber? Get your plot together, screenwriters.

All hail Amber, who was a note-taking queen ? long before she became Queen of Aldovia #ChristmasPrince2 pic.twitter.com/E6pqbAZxSB

A Christmas Prince 2 is so bad.

I can’t wait to rewatch it. #ChristmasPrince2