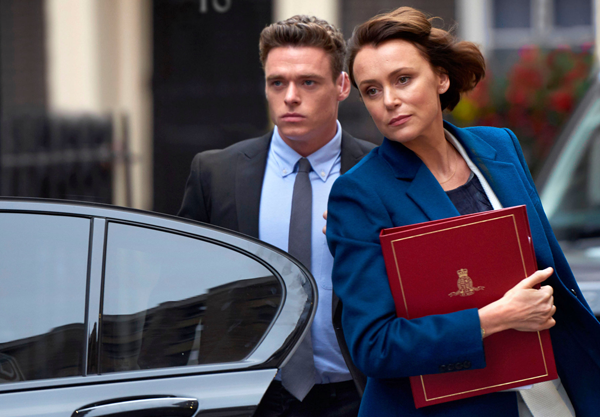 These shows are fast-paced, filled with twisty mysteries, nail biting suspense and occasionally heart thumping action sequences . They’re tense, dramatic, (mostly) serious and exciting, and they all have some steamy romantic moments too.

On a chilly winter’s evening is there anything better than curling up under a blanket and binge-watching some edge-of-your-seat thrilling TV?

Here are our picks for shows you should add to your watch-list!

IMDB description: Bodyguard tells the fictional story of David Budd, a heroic but volatile war veteran now working as a Specialist Protection Officer for the Royalty and Specialist Protection Branch of London’s Metropolitan Police Service. When he is assigned to protect the ambitious and powerful Home Secretary Julia Montague, whose politics stand for everything he despises, Budd finds himself torn between his duty and beliefs. Responsible for her safety, is he actually her biggest threat?

IMDB description: Eve is a bored, whip-smart security services operative whose desk-bound job doesn’t fulfill her fantasies of being a spy. Villanelle is a talented killer, who clings to the luxuries her violent job affords her. These two fierce women, equally obsessed with each other, will go head to head in an epic game of cat and mouse, toppling the typical spy-action thriller.

Watch on: Series 1 & 2 are available to watch on Stan Australia. Season 3 is currently streaming on ABC iView

IMDB description: When you get into trouble there’s only one person to call, Olivia Pope. Olivia is a professional ‘fixer’ who makes problems go away before anyone even knows they exist. For the moneyed, the powerful and even the President, Olivia is a legend in her field. Her spectacular success is mostly due to her unbreakable rule of always trust your gut. No matter how careful you are, when you do damage control for a living, you’re bound to cause some damage to your own life. She and her crew eat, sleep, live and breathe crisis. Each week, as the team races against the clock to defuse intriguing new problems before they become full-blown disasters, they also have to deal with their own personal issues. They may call themselves ‘gladiators in suits’, but little by little, Olivia and her crew begin to reveal the chinks in their armor.

IMDB description: Patrick Jane is a crime consultant with the California Bureau of Investigation. He has a particular gift for astute observation and reading people, honed through years of being a faux psychic. His gift makes him brilliant at solving murders, which is why the CBI have him around. However, his motive for taking on the role is purely one of revenge: find and kill the man who killed his wife and daughter – Red John.

Watch on:  All seasons are available for streaming on the 7Plus app

IMDB description: A highly articulate, erudite and intelligent businessman and mastermind, “Red” Reddington, has allegedly been on the “10 Most Wanted List” of various U.S. law enforcement agencies for over 20 years. The legend is that Red is as elusive as he is clever, controlling a labyrinth of creative enterprises, coupled with uncanny ability to gather and finesse information at the drop of a hat. On the first day at FBI for a new female profiler fresh out of Quantico, Red offers to bandy wits with the FBI. Red promises to deliver various criminals and plots previously unknown to any branch of law enforcement… and all Red requests in return is to choose his muse.

IMDB description: Kiefer Sutherland stars as Tom Kirkman, a lower-level cabinet member who is suddenly appointed President of the United States after a catastrophic attack on the US Capitol during the State of the Union, on the highly anticipated series Designated Survivor. In this dramatic thriller, Kirkman will struggle to keep the country and his own family from falling apart, while navigating the highly-volatile political arena and while leading the search to find who is responsible for the attack.

IMDB description: After a mistaken shooting during a counter-terrorist operation, Detective Sergeant Steve Arnott is transferred to AC-12, a police anti-corruption unit led by Superintendent Ted Hastings. Alongside Detective Constable Kate Fleming, they are assigned to lead an investigation into the alleged corruption by a popular and successful officer, Detective Chief Inspector Tony Gates. While Gates cleverly manipulates his unit’s figures, DS Arnott questions whether Gates is being made a scapegoat for a culture of institutionalized spin, or is guilty of darker corruption.

Love all things mystery and thriller with a touch or romance? Don’t miss the Tactical Crime Division series from Mills & Boon.