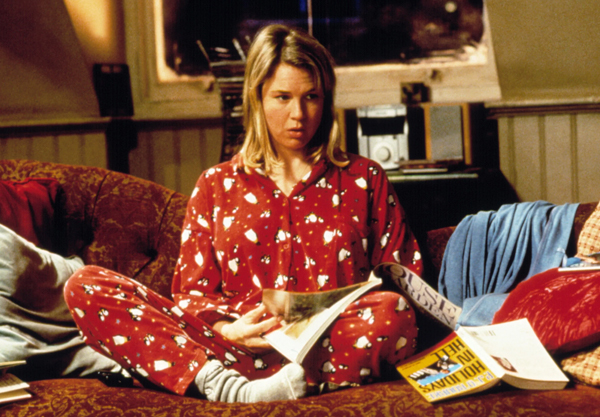 I don’t want to cause a panic, but did you know the ENTIRE Bridget Jones’s Diary collection has dropped onto Australia’s streaming platform Stan??

Possibly one of the most iconic rom-com films, ever, Bridget Jones’s Diary is a must-watch film. Following the trials and tribulations of the aforementioned Bridget as she endures a year full of love, break-ups, career moves, family dramas and truly terrible Christmas jumpers, this film remains as hilarious today as it was when it was released in 2001.

Yes, the film has its problematic 2001 moments (fat-shaming and slut shaming is NEVER ok), but when I saw the films pop up in my feed a week a go I knew immediately it was time for a re-watch. So I grabbed my eggnog, my popcorn, put on my loudest red pyjamas and had a wonderful time.

Still not convinced? Here are 8 reasons you should re-watch Bridget Jones’s Diary:

Here at Romance.com.au we LOVE all-things Austen, so what could be better than this homage to her greatest novel in the form of a modern tale about one woman’s journey to self-love and empowerment? True, its not a direct remake (no one goes out in the rain and gets a cold for one), but the journey both Bridget and Mark go on as they battle with their initial prejudices toward one another is totally universal. Plus Colin Firth is literally called ‘Mark DARCY’. Team up Bridget Jones’s Diary on a double movie night with Pride & Prejudice and you have a wonderful evening ahead.

The scene where Bridget goes down the firepole too early and lands on the camera? Her bizarre eccentric parents and their turkey curry buffet? The scene where Bridget flat irons her hair with an actual iron… so many moments in this movie had me in absolute STITCHES. It’s almost too difficult to name a singular moment of this movie that’s the most hilarious. It’s got the ‘com’ of ‘rom-com’ down pat!

Ok, so I know he’s technically the villain. But he’s pretty damn dreamy, that floppy hair…

Perhaps one of the most iconic moment of the whole film, nay, the whole damn franchise. From the moment Bridget has to decide between her sexy pants and her decidedly unsexy Spanx for the office Christmas party, to the moment her pants are uncovered whilst getting intimate with Hugh Grant’s Daniel Cleaver, this is a hilarious and relatable ride.

3. Bridget is a delightful mess and it’s #relatable

Renée Zellweger  is totally brilliant in this role; Bridget is rude, clumsy and awkward, she smokes, drinks, swears and is often uncouth. However, despite (or perhaps because of)  all that she is unutterably charming and we can’t help root for her to find her happily ever after. Plus, in all her chaos and mess she is very relatable. Who hasn’t tried to look cool in a convertible only to have their chic ensemble and hairdo ruined by the wind? Or attempted to cook something  modern for a dinner party only to have everything go horribly wrong. Totally endearing, and totally relatable.

It’s Mr Darcy! Only this time instead of being repressed and Georgian, he’s just repressed and British and wears ugly Christmas jumpers (but somehow manages to even make those chic?). The scenes where he confesses his feelings for Bridget are swoon-worthy (actually most moments he’s on screen are swoon-worthy) and he is the perfect leading man.

Ok *spoiler alert* (but I assume if you’ve gotten this far you know how the movie ends). The final moments of the film are totally perfect, and Bridget (in her wholly original Bridget way) runs after Mark Darcy, in only her cardigan and sexy pants, and they kiss as snow falls around them. Romantic and funny, this scene encapsulates the humour and rom-com magic of the movie perfectly.

What are you waiting for? Get comfy, re-watch the movie and let us know what you thought!

Want to get cosy with some romance this winter? Here are some of our faves at the moment.