We watched Holiday in the Wild and had so many thoughts… 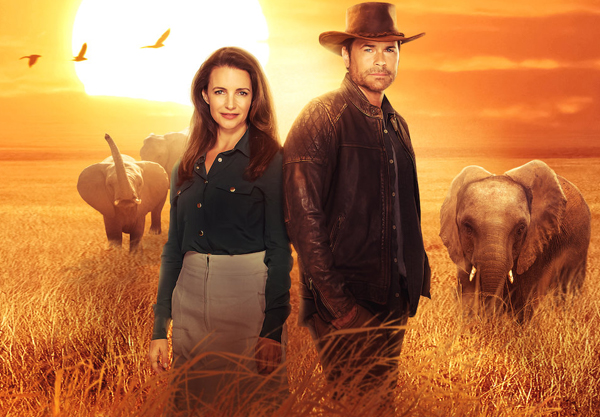 Holiday in the Wild is meant to be a Christmas romantic comedy. That’s what Netflix wants you to believe – it’s what I want to believe – and whilst there is some romance, some festive spirit, some smiles (I can’t recall laughing once during the film) it’s actually not bad. Sure, there’s some cringeworthy moments, but I still enjoyed it. Would I watch it again? Probably not. Would I recommend others to watch it? Definitely.

Forget the bad boy image of Billy Hicks from St Elmo’s Fire or the smooth Sam Seaborn from The West Wing – this is Rob Lowe, rockin’ the khaki. Although the jury’s still out whether he’s trying to channel Indiana Jones or Mick Dundee? There’s a heroine, of course – it’s a romance, remember? – and she’s one of those girls from Sex and the City. Harlot? No, that’s Samantha. It’s Charlotte. AKA Kristin Davis.

Kate and Drew Conrad are the quintessential modern couple, living the urban life in New York, with their son who’s about to leave for college. Sounds perfect, right? WRONG!

Drew blindsides his wife by announcing he’s no longer in love with her – right after they bid goodbye to their son – right after Kate decides to surprise him with a second honeymoon to Zambia – and with Christmas just around the corner! Oh joy, you emotionless twat, can you time this any better?

What’s a gal to do? Go to Zambia alone and embrace the solitude of a sun-drenched vista, wild animals, and a 5 star resort. Cue the champagne, yes!

Didnt See That One Coming Surprise GIF from Didntseethatonecoming GIFs

Yes, it’s Rob Lowe or Derek as he’s technically known in this. He’s at the bar and notices Kate sitting alone, and they start talking, until Kate confesses her situation quite indignantly, and flees quite miffed. Derek seems nonplussed – he doesn’t know this woman (yet) and she left behind an untouched seafood platter. Score!

The next day Kate is leaving for another resort and – cue the gasps of surprise – Derek is the pilot flying her there! They hit the skies, and everything seems to be going fine, until Derek unexpectedly decides to land the plane in the middle of nowhere, jumps out and tells Kate to stay put, then takes off! What’s a gal to do? You follow the man into the wild – yes, go girl! Ignore those wild animals roaming free, who might look upon you as the $10 Wednesday night steak special!

Derek has spotted a distressed baby elephant whose mother has been killed by poachers – cue the feels because it’s a baby ORPHANED elephant for Pete’s sake! I SERIOUSLY cannot cope! A rescue team arrives and Kate realises she’s about to be abandoned when she remembers she’s a veterinarian! Or she was a veterinarian, many moons ago. Well…duh! She was just living the urban life temporarily until the animals decided to call her back!

Hi-ho! Hi-ho! It’s off to the Elephant Sanctuary we go! Kate is amazed by the sanctuary – I am amazed that I am actually liking this movie – and she starts to settle in, which means she gets to see Derek a lot! Oh, and the baby elephant of course! Baby is given the name ‘Manu’ – no, it’s not because they are MKR fans – it means ‘second son’, and Kate looks after him, sleeping alongside him, and waking to that adorable wrinkly, little – er big – face, every day until he gets better!  Cue the feels again, folks!

Of course, there’s someone else in Derek’s life. This is a romance, and there must be angst, dammit! She’s blonde, gorgeous, and she is part of the foundation that funds the sanctuary. The actress is not the best, but I’ll cut her some slack as it’s only her 3rd role ever (did someone say budget?)

Point Out Check It Out GIF from Pointout GIFs

Kate realises where her true heart lies and buys another ticket to Zambia – one way, thank you very much! She goes back to the sanctuary and to Manu and Derek, and they get married – Kate to Derek, not Manu because that would be a whole other movie! –  and it’s a perfect ending.

Manu must return to the wild, and my heart is breaking as Kate and Derek say goodbye before sending their ‘son’ away.  Okay, okay, I cried, but he’s still a baby, and there’s poachers out there, and I don’t want him to leave, and I’ve lost the remote, and my dignity.

Not Get Too Attached Wisdom GIF from Notgettooattached GIFs

IN CONCLUSION…WE ALL AGREE WITH ROB LOWE

Weekend plans?
Spend it in Africa with me, @KristinDavis, and a selection of incredibly inspiring elephants! #HolidayInTheWild @netflix @ South Africa https://t.co/CG8EyrWv7e

Full disclosure, I LOVE (love) a cheesy Christmas romance, so get ready for my totally unbiased thoughts on the Netflix…Read more

As the author of a Christmass-y romantic story herself, we asked author Alyssa J. Montgomery to watch and review Last…Read more