Why The Wrong Missy Is The Worst Romance I’ve Seen In 2020. 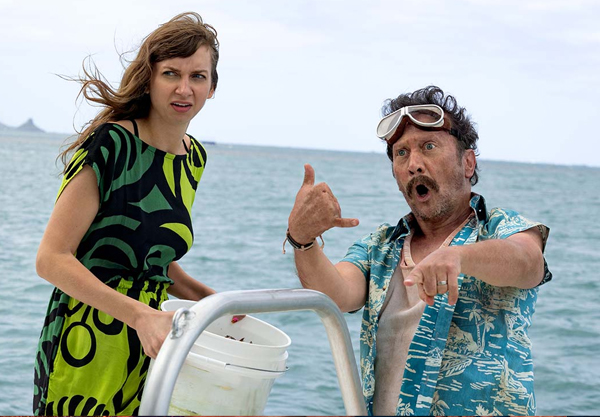 The Wrong Missy has all the elements to be a really cute romcom. A slightly offbeat heroine with chaotic energy who isn’t afraid to be herself, a case of mistaken identity, a little bit of hypnosis and a happily ever after (or at least a happy for now). But knowing what it could have been only heightens the disappointment of its reality. Because, though I love the fact that Lauren Lapkus is given the opportunity to play the comedic lead, The Wrong Missy is, unavoidably, a terrible movie.

Perhaps it’s that it’s not what was promised. The Wrong Missy has been promoted from the start as a romantic comedy, but it’s definitely more comedy than romance. And the crude kind of comedy I suppose you would expect from a movie starring David Spade. From Missy’s lap dance in the middle of a corporate retreat mixer to her drunken fall off a cliff not five minutes later, the comedy is physical, crass, and uncomfortable. The kind of humour where you’re not sure if you should be laughing or covering your face to escape the awkwardness.

Perhaps it’s the way The Wrong Missy leans in to the stereotypes of its one-dimensional secondary characters, from the cheating ex to the sexually inappropriate HR manager with no respect for privacy or personal boundaries. There’s even the cutthroat ice queen who’s going after our protagonist’s promotion, because God forbid we portray a woman with ambition as anything but cold and distant.

Or perhaps the reason this movie is so terrible is because of its highly problematic portrayal of consent. For a long time now, romance has been a strong advocate for enthusiastic consent. After all, romance is all about the building chemistry between two characters that more often than not comes to a long-awaited climax (pun intended) through physical intimacy. There is nothing sexier than two characters enthusiastically falling into bed with each other.

The Wrong Missy seems to have decided that consent is an optional extra. Missy sexually assaults Tim not once, but twice. The first time is on their flight to Hawaii where Missy literally drugs Tim and then proceeds to give him a hand job while he is still unconscious. Tim wakes to a woman he barely knows jerking him off, with an audience of fellow passengers who are all well aware of what is going on but have done nothing to stop it. This gender swap on the all too familiar story of date rape is not funny; it’s distasteful. Unconscious people can’t give consent, and rape should never be the butt of a joke.

And as if this scene isn’t bad enough, Missy goes on to do the exact same thing just a couple of hours later. Granted, this time she didn’t know that Tim had taken sleeping tablets, but the same principle applies: unconscious people can’t give consent. Even if they’re talking in their sleep. Irrespective of gender or sexuality, consent is what underpins positive sexual experiences, and it’s so easy to do well. It’s disappointing that in 2020 these kinds of movies are still being made. Especially when there are so many well-written and clever romance books out there to take inspiration from. I think I’ll stick to those, thanks.