Gareth is a masseur on the luxurious Star Island. His next client is the enigmatic pop star, Briana Brite, known for her silent persona off-stage.

In his head, he pictured Briana Brite. He knew her image mostly from the smoky artwork on her indie album, a blonde beauty with a defiant jaw jut that seemed to project an image of quiet allure and confidence.

But there was something in her eyes. Hell, he was probably kidding himself, but he’d looked long and hard at Briana’s picture and with his talent for seeing below the surface he felt as though he could see past her image, down to the darker places inside that her music spoke of.

Speaking of speaking—how will we do this without talking? Gareth knocked on the ajar bungalow door, waiting in the tropical air just turning to dusk. Sometimes his clients preferred silence while he worked, but they always began with a few simple questions about pressure and injuries.

When no one answered, after a few minutes Gareth pushed the door open. ‘Hello?’

Still no response, but the door was open and he was expected, so he took it as tentative permission to enter. He followed the hall to the main living area of the bungalow, and the view took his breath away. Not the pink ocean reflecting the setting sun outside the windows, but the angel standing before him wearing nothing but a towel.

Her corn silk hair tumbled around her bare shoulders, which were dusted with tiny freckles. Her mouth parted into an alluring smile, which was quickly quashed by her teeth finding her lower lip and biting it. Delicate hands held the towel over her frame, but the material barely concealed the voluptuous body within. Instantly, Gareth knew she’d be warm and pliable to touch, her skin with heavenly give under his fingers, soft flesh ripe for gripping firmly.

She raised a hand and waved in greeting, a rosy blush rising in her high cheekbones, and the gesture went straight to his heart, shocking it into an unsteady rhythm. She was literally heart-stoppingly beautiful.

Oh no … Something was happening to him, something he’d sworn only minutes earlier never happened to him. Gareth shifted the table in front of his groin, attempting to disguise the bulge growing there. Get it together. You are a professional, and she’s a client. A gorgeous, captivating client, but still a client. Concentrating on not sounding like a squeaky-voiced teenager, he said, ‘Hey, I’m Gareth, your masseur.’

She smiled in reply but remained silent. Gareth spoke to fill the space where a normal interaction would have taken place. ‘And you’re Briana. So, now we’re introduced, I’ll set up. Where would you like me to put the table?’

With a languid wave, she gestured towards the windows. ‘Okay, great,’ said Gareth, walking forwards and trying to regain some of his professionalism while feeling distinctly shaken. ‘You’ll need to tie up your hair—I have a tie if you need one?’

Shaking her head in dismissal, she left the room, and a waft of citrus followed her. She smelled of pink grapefruit and sugar, and the sensuous combination sent another sucker-punch to his crotch. With shaking hands, Gareth opened his table and unzipped his bag, drawing out a bottle of scented massage oil. He was warming it between his palms when Briana returned, her hair now secured in an adorable top-knot.

‘I’ll just go into the other room to give you a moment to lie on the table,’ said Gareth. Privacy for most clients was still important before and after a session, no matter how much skin he saw during.

With a cat-like grin, Brianna looked back at him over her tanned shoulder. Before he could turn away, she’d lowered the towel to the line of her lower back, and stretched herself along on the table face-down. A low, happy groan rolled out from her throat, as if she really needed this.

So help him, he did too. He needed to lay his hands on her; the pull towards her body was almost supernatural. He clung to his professionalism by his fingernails, remembering to ask, ‘Do you have any injuries or sore places I need to know about?’

Face down, Brianna shook her head, her hair knot flopping back and forth. Gareth paused for a moment, admiring the sight of Briana’s back, all that exposed skin ending where her plump ass cheeks swelled, covered by the towel. His passion for healing and helping had always made his job seem effortless, but for the first time, he walked towards a client feeling as though he was divinely privileged.

Turning her head to the side, Briana caught his eyes with hers and winked. The small gesture electrified him. He definitely wasn’t imagining the silent flirtatious tone here. A bright red buzzing had begun inside his head, warning of danger. He’d relied on that buzzing before, when clients had made innuendos about ‘extra services’ or in the case of one single client in her fifties, mistaken his professional care for personal touching and decided it meant they had a deep romantic connection.

Normally if he had even an inkling of strangeness, he would relate the Star Island code of conduct in a very casual manner while preparing to start: let me know if this pressure is good, would you like music on, as part of procedure I have to let you know all Star Island spa treatments are strictly non-sexual, would you like a complimentary reflexology hand treatment…?

It’s what he should have said, but he pushed the feeling down. This was Briana Brite, the biggest superstar in the music world. She’d made a career out of being desirable, unattainable; this was probably just her being her, and him taking it the wrong way because he was going on ten months without sex. Don’t embarrass yourself.

‘Okay, I’m going to begin now,’ he said formally. Inside his head though, he was babbling. Just a client. Just another client, he tried to convince himself one last time. He poured a generous handful of oil into his palm, watching his shaking fingers descend to her smooth back. I will not enjoy this. I will not get my kicks from feeling up a vulnerable client. She’s just like anyone else.

He truly believed it. And then his hands connected with Briana’s skin, and he was hopelessly, sinfully lost. 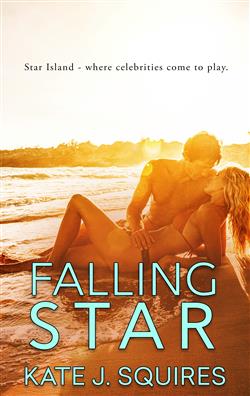 Sometimes it takes finding your heart to find your voice…

It wasn’t her fault…

Somehow a run-in with a handsy, but influential, talk show host has landed Briana Brite in big trouble with the press, and even though it was the host that wouldn’t take no for an answer, Briana finds herself banished until the scandal blows over.

It’s not his place…

Gareth might work for some of the richest people in the world, but his job as a masseur at the luxurious Star Island resort is just that – a job. And he really needs the money and the tips and the hours. Getting involved with resort guests is grounds for immediate dismissal, so the last thing Gareth needs is a troubled pop princess making waves.

It’s not meant to be…

However, when Gareth meets Briana, he realises that she’s more than just her voice, more than the media storm, more than even her management knows. But when it comes to his job and his livelihood, how much will he risk for a holiday fling?