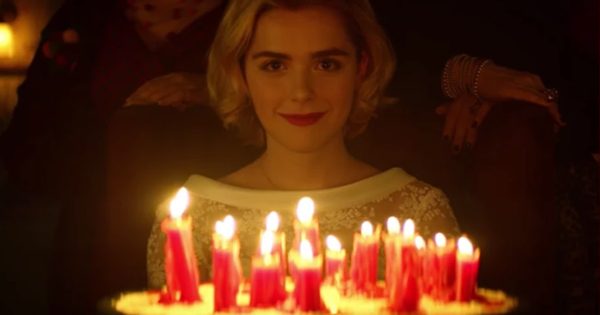 I have always found witches fascinating. They have powers over nature, over the physical and metaphysical, communing with magics that can be both dark and light depending on the way they are used and the nature of the user. This is why I tend to write about witches in my paranormal novels. They are endlessly intriguing.

So, to celebrate the upcoming witchy Netflix series The Chilling Adventures of Sabrina, are my top ten most intriguing witches in fiction, in no particular order.

A normal girl who finds she has a talent, a talent that goes awry when she suffers a loss and embraces her full dark self. It takes her best friend, Xander, to bring her back from the edge and then she struggles to find a way to come to terms with the good and the bad and the veiny inside her. A truly worthy witchy journey and played out so well by Alison Hannigan.

Agnieszka from Uprooted by Naomi Novik

An ignorant girl whose journey into knowledge of power and what she can do is as riveting as it is epic. The only disappointment about this witch and her story is that there was no follow up book.

Seemingly perfect, she shows herself to be something far more nuanced. Right from the start, she lived large on the page, far more powerful than Harry and Ron, and yet she uses her intelligence and her empathy to guide her powers to help Harry win the day. She makes mistakes, and despite her smarts, can be clueless, but if she didn’t have me before, she had me the moment she punched Draco Malfoy in the face. She is a witch for all young girls to look up to.

Whether painted as ultimate evil or a benevolent helper depending on which iteration of the myth you are reading, this witch is always fascinating in her depth of character and the way she lives by her own code. Often depicted as a victim, she never allows herself to be victimised.

Bonnie Bennett from The Vampire Diaries

She took me a while to warm up to, (a bit like Hermione Granger, a bit too goody-two-shoes and sweet and interested in always doing right), but then she showed that she was as capable of being bad as the other characters in the series. I like characters with duality – to be tested and to show a full understanding of the implications of holding such power and what it means. Bonnie stepped up and certainly had her dark moments.

Regina Mills from Once Upon A Time

Seemingly a true baddy, Regina (otherwise known as The Evil Queen from Snow White), has a backstory with depth and pathos that make it very difficult to shove her in the ‘she’s just evil’ basket. She battles herself as much as she battles those she wants revenge against, and the ultimate result is a character whose path to redemption is full of fantastical highs and horrible lows. She does so many things where you think – how can she come back from this? But somehow, in the end, she does.

The Poole witches from Penny Dreadful

The Poole witches represent the traditional ideal of duality – a face of beauty and a face of evil, with the evil taking point in their ultimate character arc. Their journey is memorable because it is set up against the ideas of insanity and sanity, of feminine hysteria against feminist strength mixed with the religious-bound fervour of a more powerful witch who is fighting a battle between the evil they represent and the good she wants to represent. They are a part of a greater question: is it the power that’s evil or the person behind it?

Like the Poole Witches, Adalind has a face of beauty and a face of evil/ugliness of her Wesen self, the Hexenbiest, which shows whenever her power manifests. There is more to her than simple evil and she goes through a journey of losing her magic, regaining it and then questioning if her magic is good or bad and if it’s something she wants in her life. Despite this introspection, she doesn’t always choose well, which makes her a nuanced witch I can always watch with interest.

Brought up to believe that magic is evil, her story is one of fighting her heritage and seeing beyond the black and white of the world she’s been brought up in, to embrace who she truly is. Hers is not a ‘chosen one’ story – which is what I like about it – but she does have to embrace her magical side to truly become who she is meant to be.

Skye, Bron, Shelley and Eloise from the Pack Bound Series

I will finish my 10 by cheekily adding my other favourite witches: Skye, Bron, Shelley and Eloise from my Pack Bound series. There are elements of them in the stories of the witches I’ve chosen on this list – tragedy, pathos, bad decisions, good decisions, and a never- ending questioning of what it means to have power and what one should do with it.

Do you have a favourite pop-culture witch? Tell us in the comments below.