When he goes hunting a thief, he never expects to catch a bluestocking...

Marie had the perfect life plan: she would satisfy her father's ambition by graduating as one of the first female doctors in Europe, and she would satisfy her mother's ambition by marrying a very suitable fiancé in a grandiose society ceremony. Only weeks away from completing the former, Marie is mere days away from achieving the latter. But her whole life is thrown into chaos when her fiancé dies, mysteriously returns, and then is shot and killed, and Marie risks her own reputation to save the life of the man falsely accused of the murder.

Gordon, Lord Stanmore, finally tracks down the conman who stole from his estate, only to find himself embroiled in a murder plot. The woman he rescues offers to rescue him in return, by marrying him and providing an alibi. Gordon's ready agreement to the scheme grows the more time he spends with his new wife. Her wit, her intelligence, her calm, her charm: Gordon finds himself more and more enchanted with this woman he met by mistake. But as the clues to the identity of the murderer start to align with the clues to the thief, they reveal a more elaborate scheme than he could have imagined, and though he might desire Marie, Gordon is unsure if he can trust her.

As their chase leads them out of Amsterdam and into the UK, both Gordon and Marie must adjust to the life that has been thrust upon them and decide if marriage came first, can love come after?

When he goes hunting a thief, he never expects to catch a bluestocking...Marie had the perfect life plan: she would satisfy her father's ambition by graduating as one of the first female...
Buy now
Read Excerpt

She wants to be one of the world's first female doctors; romance is not in her plans. 1887: Too tall, too shy and too bookish for England, Lady Josephine moves to Holland to become...
Buy now
Read Excerpt 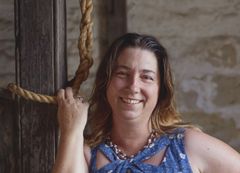 Renee Dahlia is an unabashed romance reader who loves feisty women and strong, clever men. Her books reflect this, with a side-note of dark humour. Renee has a science degree in physics. When not distracted by the characters fighting for attention in her brain, she works in the horse racing industry doing data analysis. She writes for two racing publications, churning out feature articles, interviews...

by Renee Dahlia The Dahlia family isn’t religious, preferring to pick and choose the parts of any ceremony we want…Read more